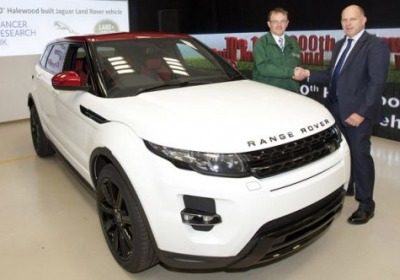 Jaguar-Land Rover is not what you'd call a volume automaker by any stretch of the imagination. But in the dozen years since it started manufacturing at its Halewood plant near Liverpool, England, the automaker has already built its millionth vehicle.

The landmark vehicle is a Range Rover Evoque, done up in white with red roof and mirrors, black wheels and a red and black interior. The crossover is set to be donated to Cancer Research UK, which will auction it off next year to help fund its projects in the north-west of the country.

Halewood started manufacturing the Jaguar X-Type in 2001, then went on to assemble the Land Rover LR2 / Freelander 2 before taking on production of the Evoque a year and a half ago. The facility reached the 300,000-unit milestone just last year as production moved to a 24-hour cycle for the first time in either marque's history.

The 1,000,000 vehicle is a unique Range Rover Evoque, painted in a special one-off colour combination and will be donated to Cancer Research UK. The vehicle is a Fuji-White, Dynamic with ebony-black alloy wheels and distinctive and unique Firenze-Red contrast roof, matching Firenze-Red mirror scalps and red/black sports seats and interior door panels.

Global demand for Range Rover Evoque has exceeded expectations with 18,000 advanced orders before job 1 on 4 July 2011. With continued demand for Evoque and growing sales of Land Rover Freelander 2, this production milestone was achieved earlier than predicted. Production volume at Halewood has increased significantly over the past 12 months due to 24 hour working, bringing the arrival of the 1,000,000 vehicle ahead of original forecasts.

In 2003 the X-Type achieved best in class Paint Appearance in the JD Power US survey, a hotly contended and sought after prize, which was retained in 2004 and again in 2006. In 2005 Halewood celebrated another significant manufacturing award, this time with the JD Power European Gold Plant Award in Recognition of X-Type's excellent quality. In 2006 the 2.2 Diesel was launched and in December 2009 the last Jaguar X-Type drove off the line at Halewood.

In July 2011 Halewood, and the world, welcomed the arrival of the Range Rover Evoque. The smallest, most efficient production Range Rover ever made. When the Evoque started life it had already generated an exceptional market response with more than 18,000 advance orders from customers worldwide. Waiting lists for the car peaked at 12 months for some markets during the second half of 2011. As a result of this demand, Halewood Operations moved to 24 hour production for the first time in its 50 year history. The Evoque has received over 130 global awards and is the biggest selling Jaguar Land Rover vehicle, breaking Jaguar Land Rover production volume records in both of its first two years of production. Halewood has manufactured 255,186 to date.

Richard Else, Operations Director, Halewood, said: "We are delighted to be celebrating this huge milestone for Halewood. This unique Evoque looks stunning and is a one-off vehicle that will raise money for Cancer Research UK projects here in the North West."

"Over the past few years many of the families of my growing team have been impacted by various forms of cancer. This milestone vehicle, built with pride at Halewood, will help raise much needed funds to help eradicate this dreadful disease."

The 1,000,000th vehicle will be donated to Cancer Research UK, who will take ownership of the vehicle later in the year. The CRUK team will be placing the car in a special auction event in 2014. Details of the event will be revealed in the new year and funds raised from the vehicle will then be spent on CRUK projects in the North West of England.

Cancer Research UK funds world-class research and clinical trials throughout the North West and last year spent nearly £21 million supporting the work of doctors, nurses and scientists at hospitals and major universities in the region. Every hour more than four people in the North West are diagnosed with cancer.

Head of Volunteer Fundraising at Cancer Research UK, Simon O'Leary, said: "We are incredibly grateful to Jaguar Land Rover for thinking of us and making such a generous gift. Cancer Research UK receives no government funding for its life-saving research, so every step we make towards beating cancer relies on every pound donated. The money raised by the auction of the car will make a real difference in the fight against cancer."