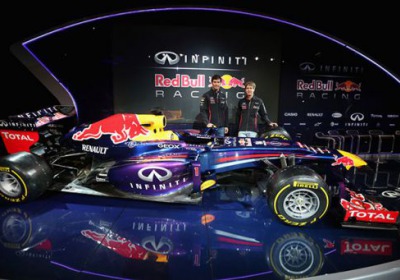 This is the car and the team that everyone wants to dethrone. The stability of this year's regulations means that the Infiniti Red Bull RB9 is a seriously honed RB8; however, that's a situation probably no other team would complain about seeing that the RB8 recovered from early stumbles and reliability issues last year to carry Sebastian Vettel to a third consecutive driver's title and the team to a third consecutive constructor's trophy.

The most noteworthy revisions to the car are the partial vanity panel that omits the driver cooling slot, the even narrower rear end – a feature of just about every car launched so far – and purple sidepods to showcase new title sponsor Infiniti. Adrian Newey, perhaps the most feared designer on the pit lane, said the nose and front wing could be changed relatively easily throughout the season, but he wanted to make sure to get the middle of the car – everything from the sidepods, back – as good as possible since they're more difficult to re-engineer. His track record leads us to believe he did just that.

Below are two videos, one of the making of the RB9, the other the launch at team headquarters in Milton Keynes.