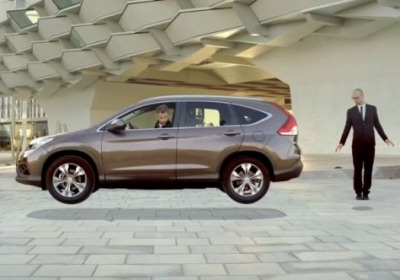 This year the Detroit Auto Show didn't just celebrate the automobile, it celebrated how we find out about the automobile, too. Partnering The One Club, this year introduced the 2014 One Show Automobile Advertising of the Year Award to Cobo Hall, celebrating winners in five different categories of advertising: broadcast television, online, interactive, experiential, and print/outdoor. Winners in those categories were judged by 50 creative directors and journalists, while a Public Choice category was chosen from among nearly 20,000 online votes.

Honda walked off with three of the six awards, its Hands spot taking Broadcast honors, its Sound of Honda getting the Online category and Illusions winning Public Choice. Hyundai made the grade in Interactive with Driveway Decision Maker, Fiat captured Print/Outdoor with its "Letters" ad, and Toyota's Tundra Endeavor Campaign spot and BMW's A Window into the Near Future were co-winners for Experiential.

You can watch all of the press release and winning videos below or check out all of the finalists, announced last month, for a refresher.


NEW YORK, Jan. 14, 2014 /PRNewswire/ -- The One Club (www.oneclub.org), producers of the prestigious One Show Awards, in partnership with the North American International Auto Show (www.naias.com), announced today the winners for the 2014 One Show Automobile Advertising of the Year Award. The awards show received over 500 entries from around the world and was judged by a distinguished panel of 50 creative directors and journalists.

"We're seeing fantastic work in automotive across media," said Yash Egami, Director of Content at The One Club and producer of the Automobile Advertising of the Year Awards. "Automotive is known for its great TV spots, but it's breaking ground in other categories, like experiential and interactive, where we're seeing thoughtful, engaging ads that are generating personal experiences as well as large-scale spectacles."

"Automotive advertising has been elevated to a true art form," said Bob Shuman, Chairman of the NAIAS 2014. "Content now includes story lines, character development, and many qualities that are found in the production of fine films and TV programs. The delivery of this content is becoming increasingly progressive, embracing social media and other alternative forms of communication. We are very excited to be associated with this award, and congratulate the winners."

Winners were recognized in five categories – Print & Outdoor, Broadcast TV, Online Videos, Interactive and Experiential Advertising – and were revealed on-stage at a special event during the NAIAS Press Preview on Tuesday, January 14, 2014, at the Cobo Center in Detroit.

The Public Choice winner was Honda "Illusions" by McGarryBowen in London. Nearly 20,000 viewers participated in online voting at The One Club website.

Visit automobile.oneclub.org for more information on the Automobile Advertising of the Year Award. Email pablo@oneclub.org to request images of the print/outdoor winner.

About The One Club
The One Club, producer of the prestigious One Show and Creative Week, is the world's foremost non-profit organization recognizing creative excellence in advertising and design. The One Show honors the best work across all disciplines, including Advertising, Interactive, Design and Branded Entertainment. Creative Week takes place in New York City every May and is the preeminent festival celebrating the intersection of advertising and the arts.

About the North American International Auto Show
Now in its 26th year as an international event, the NAIAS is among the most prestigious auto shows in the world, providing unparalleled access to the automotive products, people and ideas that matter most - up close and in one place. Administered by Executive Director Rod Alberts, the NAIAS is one of the largest media events in North America, and the only auto show in the United States to earn an annual distinguished sanction of the Organisation Internationale des Constructeurs d'Automobiles, the Paris-based alliance of automotive trade associations and manufacturers from around the world.

SOURCE The One Club