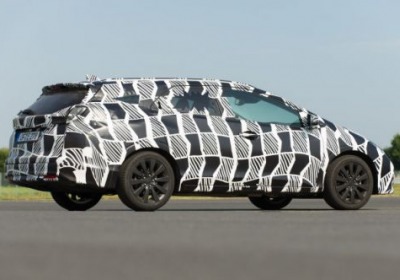 Honda will be bringing its new Civic Tourer to next month's Frankfurt Motor Show, just as we predicted in our spy shots of the new MPV from back in April. The new model, which will arrive in European dealers in 2014, will be built alongside Honda's Euro-spec Civic hatchback, Jazz (Honda Fit) and CR-V in Swindon, Wiltshire, UK.

Honda first hinted at the Civic Tourer with a concept at the 2013 Geneva Motor Show, which is set to do battle with the Toyota Auris and Volkswagen Golf in the European market. The production Civic Tourer will also be shown alongside a refreshed Civic hatchback, yet another NSX Concept variant, a McLaren MP4/4 Formula One car, and Honda's World Touring Car Championship Civic.

Honda's new British built Civic Tourer will be making its first public appearance at the 2013 Frankfurt Motor Show alongside the refreshed Civic hatchback. In addition to these two debuts, Honda will showcase a selection of modern and historic racing machines alongside its ultimate sportscar, the NSX Concept, highlighting Honda's racing DNA and sporty heritage.

Civic Tourer & Refreshed Civic hatchback
Developed and designed in Europe, the new Civic Tourer features a sleek and sophisticated exterior combined with class leading interior space. This new model will be built at Honda's UK manufacturing factory in Swindon alongside the Civic hatchback variant, Jazz and CR-V and is set to be launched in early 2014.


Alongside this new addition to the Civic family, Honda is further strengthening the Civic range with a refreshed hatchback model. The Civic will feature exterior and interior design refinements and will also be displayed for the first time at Frankfurt Motor Show.

Honda NSX Concept II
This concept, first shown in Europe at the Geneva Motor Show earlier in the year, suggests a potential direction for the next-generation NSX's interior design. The NSX will act as the halo of the Earth Dreams Technology series, embodying Honda's philosophy of balancing dynamic performance with environmental efficiency.

McLaren Honda MP4/4 Heritage F1 Car
Powered by a 1500cc V6 twin-turbo engine, this iconic machine dominated the 1988 F1 series, winning 15 of 16 GPs. It set the record for the number of GP wins in a season and won both the Constructor's and Driver's championships. Honda will return to F1 in 2015 under a joint project with McLaren.

Honda will also display the RC213V Race Motorcycle that is currently running in the Moto GP for the Repsol Honda team, further demonstrating Honda's passion and pedigree in the world of Motorsport.

The Honda Press Conference will take place at 13:30hrs CET on Tuesday 10th September on the Honda stand (Hall 9: Stand B11).