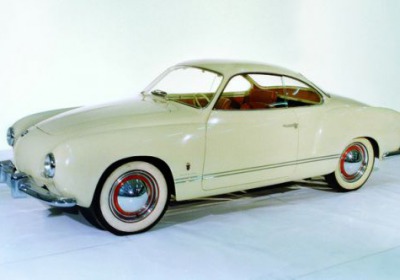 Volkswagen's product portfolio may be as extensive these days as any other carmaker in the business. But if you still think of the original Beetle as synonymous with the brand, that's probably because a) you're old and b) the Beetle was the company's only product until the mid-50s.

Sixty years ago Wilhelm Karmann (founder of the eponymous coachbuilder) was in Paris for the auto salon and met up with Luigi Segre and his team from Carrozzeria Ghia who showed him what was essentially a "Beetle in a sports coat." A month later they showed it to Volkswagen chief Heinrich Nordhoff who, setting aside his conservative tastes, approved it for production. And so the Volkswagen Karmann Ghia was born, giving the German marque a second product line. It still used Beetle mechanicals and was built at the same Karmann factory in Onsabrück that was already assembling the Beetle Cabriolet.

It took another couple of years to put the design into production, but from 1955 to 1974, Volkswagen and Karmann built 362,601 coupes and 80,881 of the subsequent convertible that arrived in 1957. Today the Onsabrück factory is part of the VW Group, handling production of the Golf Cabriolet, XL1 and Porsche Boxster and Cayman, and with that original Karmann Ghia prototype as part of its factory collection.


Wolfsburg, August 20, 2013 – Thanks to the Karmann Ghia, Volkswagen had a car in the mid-1950s in its line-up that was positioned above the Beetle, allowing the company to appeal to a broader customer base. It is now 60 years since that prototype was shown internally, on the occasion of the Paris Motor Show. The car went into full production in 1955. Today the one-off prototype is one of the stars of the Volkswagen Osnabrück Automobile Collection.

The genesis of the car came from Wilhelm Karmann, who hired Luigi Segre of Carrozzeria Ghia in Turin to transform his idea into reality in early 1953-at first without even consulting Volkswagen. Initially, a convertible sports car was envisaged, but the prototype was actually a coupe.

In October 1953, the car was taken to a small garage in Paris and shown by Ghia to Karmann, who had traveled to the city for the Paris Motor Show. Wilhelm Karmann was thrilled, and in November of that year he showed the attractive small car to the otherwise conservative Volkswagen chief Heinrich Nordhoff. Karmann was able to do this because a close relationship already existed between the two Wolfsburg companies-Karmann had been building the Volkswagen Beetle Cabriolet since 1949.

The prototype won over Volkswagen's managing director. Once the costing was worked out, a decision was soon made to go into full production. The delay between decision and production allowed for some body detail changes and interior refinements to be made, although the basic form remained as Ghia had designed it. Volkswagen Beetle running gear underpinned all 450,000 Karmann Ghias, known internally as the type 14, made between 1955 and 1974.

Ultimately, Wilhelm Karmann's dream of a convertible version also became reality: at another internal presentation in Wolfsburg, the cabriolet-once again designed by Luigi Segre and his team-made a big impact. Full production of the convertible version began in 1957. By the time Karmann Ghia production ended in 1974, 362,601 coupes and 80,881 cabriolets had rolled off the line. Like the Beetle itself, the "Beetle in a sports coat" was also a huge success story.
The one-off coupe prototype is part of the Volkswagen Osnabrück private collection, but can be admired outside of the factory on special occasions such as the 5th Schloss Bensberg Classics (from September 6-8). The Karmann factory is now part of the VW Group as Volkswagen Osnabrück GmbH and produces the Golf Cabriolet, the Porsche Boxster and Cayman, and the Volkswagen XL1.

About Volkswagen of America, Inc.
Founded in 1955, Volkswagen of America, Inc., an operating unit of Volkswagen Group of America, Inc., (VWoA) is headquartered in Herndon, Virginia. It is a subsidiary of Volkswagen AG, headquartered in Wolfsburg, Germany. VWoA's operations in the United States include research and development, parts and vehicle processing, parts distribution centers, sales, marketing and service offices, financial service centers, and its state-of-the-art manufacturing facility in Chattanooga, Tennessee. The Volkswagen Group is one of the world's largest producers of passenger cars and Europe's largest automaker. VWoA sells the Beetle, Beetle Convertible, Eos, Golf, GTI, Jetta, Jetta SportWagen, Passat, CC, Tiguan, and Touareg vehicles through approximately 600 independent U.S. dealers.