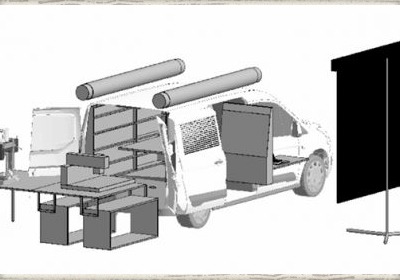 What you see in the above image is a rendering of the Hackmobile Transit Connect Wagon. What is that? It's a "mobile fabrication and hacking unit" that includes tools for metal- and woodworking, 3D and electronics fabrication, a three-axis CNC machine called "The Fabber," a video projector and screen, an air compressor, an 84x48-inch work surface that folds out like a Murphy bed and oh so much more. When not in use, all of the implements fold neatly into the back of Ford's award-winning van.

But perhaps the more important question is why is that? Because Make Magazine held an Ultimate Maker Vehicle Challenge in conjunction with Ford in which ten teams created were charged with creating "the ultimate Ford Transit Connect Wagon for the do-it-yourself enthusiast." Team Twin Cities Maker won the competition with the Hackmobile, and in addition to winning $10,000, Ford has declared it's actually going to build the thing - which is great, because if they can actually engineer a road-legal Hackmobile Transit Connect Wagon as envisioned, the inevitable A-Team movie reboot might need to think about including it.

Check out the video below for a cheeky walk-through of the Hackmobile, and get all the particulars in the press release below that.

- In the spirit of Vandemonium – and as a surprise to the builder, Ford will actually build the Hackmobile Transit Connect Wagon following contest presented by the company and MAKE magazine

- MAKE magazine will award the Hackmobile design team $10,000 as the grand prize and $2,500 to runner-up Jimmy Diresta in the Ultimate Maker Vehicle Challenge

Dec 23, 2013 | Dearborn, Mich. - The Hackmobile has been selected as the winning design in the Ultimate Maker Vehicle Challenge, a contest presented by Ford Motor Company and MAKE magazine featuring 10 teams competing to create the ultimate Ford Transit Connect Wagon for the do-it-yourself enthusiast.

Hackmobile was created by Minneapolis and St. Paul-area residents Jon Atkinson, Becca Steffen, Riley Harrison and Michael Freiert, members of Twin Cities Maker. Their idea was to design a Ford Transit Connect Wagon to transport a three-axis CNC machine the team calls The Fabber because of its use as a multipurpose tool in fabricating.


Aside from The Fabber, Hackmobile will have shelving and storage for tools – making it a mobile workshop for woodworking, metalworking and 3D fabrication.

Twin Cities Maker is a nonprofit community organization that operates a shop called the Hack Factory, where members build projects out of various materials, as well as hold classes for the community.

"The Blue Oval has always been about innovation, and that do-it-yourself spirit is alive and well today," said Sherry Kollien, Ford SEMA vehicle project manager. "The sky is the limit with vehicles like Ford Transit Connect, and we're very excited to surprise the Hackmobile team and make their dream vehicle into a reality."

The 10 contestants in the Ultimate Maker Vehicle Challenge were given a budget and specific design and build criteria to work with before submitting their proposal. They were encouraged to define a particular vision for the ultimate do-it-yourself Ford Transit Connect Wagon.

Members of the public were allowed to vote once a day for as few or as many entries as they liked, judging the concepts based on overall design and customization, as well as maker spirit.

The all-new 2014 Ford Transit Connect – which features class-leading configuration options and goes on sale early next year – has been named International Van of the Year 2014. Its versatility has ignited the creative spirit of so many owners that Ford refers to it as their moment of Vandemonium.

The DIY challenge is part of Ford's Makers and Movers campaign with MAKE magazine highlighting Transit Connect Wagon. Throughout the campaign, owners who have used their talents to customize the vehicle have been showcased in stories and videos on Makezine.com. The profiles show how Ford has manufactured a vehicle that can be modified for an individual's tastes and passions.

For more information about Ford Transit Connect Wagon, or the cargo van, including pricing, visit www.ford.com/2014tcbuild&price.

About MAKER MEDIA
Maker Media is a global platform for makers, connecting them with each other, and providing them with valuable resources, products and services. Through media, events and ecommerce, Maker Media serves a growing maker movement that is global in scope. Whether as hobbyists or professionals, makers are creative, resourceful and curious, developing projects that demonstrate new ways of interacting with the world around them. The launch of MAKE magazine in 2005, followed by Maker Faire in 2006, jumpstarted a worldwide Maker Movement, which is transforming innovation, culture and education. Maker Media also develops "getting started" kits and books that are sold in its Maker Shed store as well as in retail channels. Maker Media spun out of O'Reilly Media on January 1st, 2013 and received venture funding from O'Reilly AlphaTech Partners, Floodgate Partners and Collaborative Fund. The company is located in Sebastopol, CA.

About Ford Motor Company
Ford Motor Company, a global automotive industry leader based in Dearborn, Mich., manufactures or distributes automobiles across six continents. With about 180,000 employees and 65 plants worldwide, the company's automotive brands include Ford and Lincoln. The company provides financial services through Ford Motor Credit Company. For more information regarding Ford and its products worldwide, please visit corporate.ford.com.