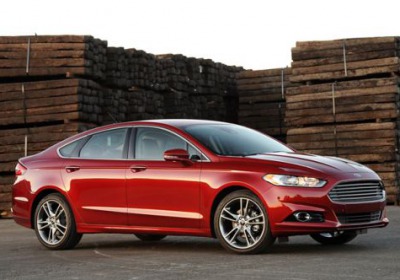 YouGov's mid-year Brand Index rankings of America's best perceived brands has been released, and Ford has found its way to the top. The Dearborn, Michigan based manufacturer beat out online shopping giant Amazon, The History Channel, and home improvement superstore Lowe's, to take the top spot.

Ford jumped from sixth overall in 2012 to first for 2013, but those that have been watching these rankings shouldn't be hugely surprised. Ford was rated the best perceived automotive manufacturer by the same organization last year. The Blue Oval's success on the overall brand rankings is made all the more impressive by the complete lack of other automakers on the list.

YouGov (that is, survey respondents) cited Ford's first quarter of 2013 business, which saw an increase in market share and the best earnings recorded in over 10 years. Successfully launching the Focus and Fusion (pictured) and keeping them fresh in the minds of consumers has also contributed to Ford's best overall score.

YouGov's Brand Index asks survey respondents whether they've heard anything positive or negative about a brand in the last two weeks. That includes anything in advertising, news or word of mouth. Following the old saying "There's no such thing as bad publicity," the responses, both positive and negative, are correlated into the Buzz score, which rates the brand's perception among the public. Check out all the results in the official press release below.

Ford has driven up the Buzz list to snag the number one spot in mid-2013 from 6th place in the annual 2012 rankings. It has been a successful year so far for the automaker in terms of perception and profits, with Ford posting its highest-earning quarter in Q1 2013 in more than a decade. The manufacturer increased its US market share from 15.2% in 2012 to 15.9% in 2013, thanks largely to the success in sales of its Focus model.
Ford launched two "And Is Better" spots to promote the specifications of its entry-level models, the Ford Focus and Ford Fusion, which reached the US audience in spring 2013.

Amazon once more snagged the top spot in the discount retailer category, and is ranked second out of all US brands tracked by BrandIndex. The e-commerce giant has expanded its Kindle brand, bringing back the popular 9.7 inch Kindle DX and launching the Kindle Fire HD touch-screen in the US and worldwide. Its ever-expanding range of goods on offer means Amazon has kept the brand's reputation for high value and maximum choice.
Amazon is rated as the top brand in terms of Buzz score by parents with children under the age of 18, young people aged 18-34 and consumers who identify as Democrat.

The sandwich chain held the top spot last year with a score of 40.3, and has dropped slightly in the rankings to third place with a Buzz score of 29.8. Subway topped the perception list among quick service restaurants above Wendy's, Pizza Hut and McDonald's.
Subway has strived to maintain its image as the healthy option by promoting "Fresh Fit meals" in a Super Bowl spot in January. The chain celebrated its fifteenth birthday this year, and has set off its summer campaign with an "Avocado Love" commercial featuring two Subway customers going a little over-the-top in praising the ingredient.

It may offer a little more drama than history, but this network has snagged this year's most popular cable TV series – Vikings. The high-budget historical drama has received significant media attention. The History channel topped the network Buzz list with its score of 29.1, above Discovery and the Weather Channel.

The TV channel has also gained a following with its series of The Bible and Men Who Built America. Programs like UFO Hunters, Swamp People and Hairy Bikers means the channel offers a diverse mix.

Lowe's has scored high this July, achieving 5th spot once again from the end of 2012. The home improvement store has tapped into the social-media savvy audience by launching 12 6-second spots on its Twitter and Facebook pages featuring home improvement tips. It has stuck to its more traditional method of TV marketing to get do-it-yourselfers in store with a "Rituals" commercial, comparing home improvement to being victorious on the sports field.

V8 has been on a kick to appeal to consumers with its range of vegetable and tea-infused energy drinks. "Need A Little Kick?" and "Could've had a V8" were broadcast on TV and social media platforms earlier this year.
Even for those consumers who don't eat their greens, V8 launched a fruit-flavored V-Fusion in April accompanied by the spot "Husband and Wife" featuring a vegetable-shy husband who comes round to the V8 brand.

Walgreens has moved from 13th position in 2012 to 7th this year – the prescriptions and health products chain recently promoted its tagline, "The Corner of Happy and Healthy" with a buy-one-get-one free summer offer in its "Yoga" spot, and has been advertising summer deals on its Facebook page.

YouTube is the top brand for LGBT consumers, and recently promoted its celebration of same-sex Supreme Court verdicts with a "Proud to Love" video. YouTube encouraged website users to share its stance, saying it would "strive to make YouTube a place where all communities can feel proud to express themselves and connect through video."
The video brand has managed to stay current by acting as a vehicle for major news stories – from the recent Paula Deen video apology to airing the premier of Dexter's eighth season. The social networking site has also expanded its paid-for section by offering a range of movies to its users.

Amazon has made it to the top-ten Buzz list twice – this time with its e-reader brand, Kindle. The Kindle Fire HD has been sold globally this year since its US release in late 2012, and the brand remains the best selling e-reader in the US.
Updates to the Kindle App have kept the name compatible for use with Android and iPhone devices, and in May Amazon launched its own currency, Amazon Coins, for use on the Kindle App Store and Kindle Fire device. All Kindle Fire users in America were given 500 Amazon Coins worth $5 for free, which perhaps boosted the brand's reputation among customers.

Cheerios is the third food and drink brand to make it to the top-ten list, behind Subway and V8. The cereal announced a new twist to its classic breakfast offerings with the Peanut Butter Toast Crunch and Honey Nut Cheerios Medley Crunch in January this year.
Cheerios gained positive media attention for its "Just Checking" spot, which featured a mixed-race family, in which a girl asked her mom if Cheerios are really good for your heart. Despite fuss made by some consumers on their social media pages, Cheerios stood by the campaign, saying General Mills casted the actors to reflect the changing US population.