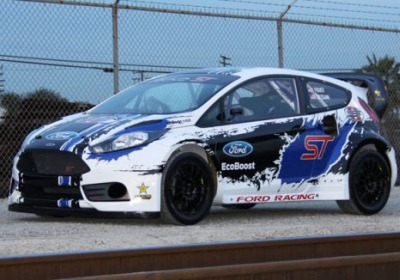 The 2014 Ford Fiesta ST doesn't go on sale until this summer, but fans of Global RallyCross will be able to catch the car in action before then. Announced ahead of the Chicago Auto Show, the Fiesta ST will be the car run by Ford GRC teams this season, and the model on display in Chicago will be the racecar built by Swedish tuner OlsbergsMSE driven by Tanner Foust and Brian Deegan. Ken Block and his newly renamed Hoonigan Racing Division will also be competing in the Fiesta ST.

The 2013 GRC season has not been announced yet, but the venues will also include the summer X Games events in Brazil, Spain, Germany and, of course, Los Angeles. Ford announced that it will be the sole automotive sponsor of this year's summer X Games, and it will be looking to bring home a gold medal this year after Block placed silver last year.

In other Ken Block- and Ford-related news, another Chicago debut will be a tuned Focus ST called the TrackSTer project. Built in cooperation with Block, Ford and automotive tuner fifteen52, the TrackSTer will get plenty of styling, performance and handling upgrades. Some of the add-ons include a performance exhaust and short-throw shifter from Ford Racing, a rebuilt engine, upgraded components such as the limited-slip differential, intercooler, engine controller and clutch as well as upgraded brakes.

Scroll down for press releases on both the GRC Fiesta ST and the TrackSTer project.


About Fiesta ST
Fiesta ST is the result of the combined efforts of Team RS in Europe and SVT in the United States. Fiesta ST may be born with racing DNA, but buyers won't have to pay for that performance at the pump. Available exclusively as a five-door hatchback in North America and with a six-speed manual transmission, Fiesta ST is projected to achieve up to 34 mpg. A new high-output variant of the award-winning 1.6-liter EcoBoost® four-cylinder engine propels Fiesta ST with an estimated 197 horsepower and 214 lb.-ft. of torque. This compact performance machine sports a unique grille and chin spoiler with new rear diffuser and fascia extensions. Bright tipped dual-exhaust pipes and high-mount spoiler along with unique 17-inch wheels complete the visual package: Fiesta ST looks like it's made for the racetrack.

fifteen52 has incorporated the best of the best in constructing the TrackSTer, and trips to the Ford Racing performance well have been numerous, to say the least. A partial list of incorporated parts that will soon be available to all Focus ST enthusiasts includes:


In addition to Ford Racing Performance Parts, components and partners from Ford Racing's Focus race programs globally have lent their expertise, including:

With such a vast array of race-tested quality performance parts at its disposal, along with access to Ford Racing data, expertise and global strategic relationships, fifteen52 believes it has built what is possibly the ultimate all-around Focus ST with the TrackSTer.

About fifteen52
fifteen52 was founded in 1996. Originally known for bringing high-end Euro accessories to the US VW/Audi market, they quickly branched out into the high performance world as well. Builder of many high-profile project cars such as the VWvortex.com chronicled Project X Mk4 Jetta coupe series, fifteen52 has consistently been on the cutting edge of the Euro aftermarket scene. In the late 2000s fifteen52 began manufacturing their own line of wheels, with their most famous model, the Tarmac, making its way onto Ken Block's HFHV Gymkhana FOUR and FIVE 650-hp Fiestas. By recently teaming up with Ford Racing and Ken Block for Project ST, fifteen52 is set to expand its reach even further into the automotive aftermarket scene. To learn more about these projects, and follow their progress, check out www.fifteen52projectST.com.