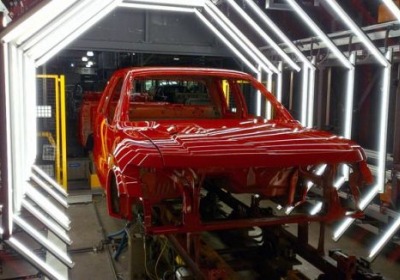 Knowing how the bacon gets made rarely entices us and, in the same vein, the same usually goes for knowing about how new cars get painted. But in both instances, however, quality – or a lack thereof – is instantly obvious. In terms of the latter, Ford is showing off its new paint quality process with 3D Dirt Detection Technology to find imperfections in vehicle paint more easily and more quickly.

This process – being performed on the F-150 SVT Raptor above – uses 16 computer-controlled cameras to create a three-dimensional model (inset) of the vehicle to detect flaws in the paint including dirt particles, which can then be buffed out manually. Ford says this new technology cuts down on time spent looking for paint flaws and gives workers more time to correct those that are discovered.

Currently, Ford only uses its 3D Dirt Detection Technology system at three factories (the Dearborn, MI facility, along with those in Louisville, Kentucky and Valencia, Spain), but it will soon spread to five more plants in North America. Ford has released a video and press release for this innovative and unexpectedly interesting process, both of which are posted below.


The Dirt on Ford's New 3D Dirt Detection Technology: There Isn't Any

-Digital imaging system analyzes more than 3,000 images in 15 seconds to identify dirt particles. Previously, paint inspections were based solely on the human eye

New Ford F-Series models are the latest vehicles to benefit from the company's industry-first dirt detection technology to ensure optimal paint and surface quality. The system uses high-resolution cameras and reflected light to digitally identify surface imperfections finer than a grain of salt in final vehicle assembly, and to cue operators where to polish and buff out imperfections.


How it works
Ford's dirt detection technology takes microscopic scans of each painted vehicle surface, and then cues final assembly operators to address repairs where necessary. In the past, paint and surface inspections were based on human-eye examination.

The 3D imaging system applies varying degrees and angles of light while scoping the paint surface of vehicle bodies to identify dirt in paint and other irregular paint conditions. High-resolution images – 3,150 images are captured in 15 seconds for every vehicle made – are stitched together for a full 3D image that is digitally compared to a perfect computer model.

The dirt on the dirt
Dirt particles in paint are difficult to manage with conventional quality control methods. Minute particles can enter a shop floor from multiple environmental sources, machinery or workers, which makes paint quality one of the toughest variables to control in production. Along with Dearborn Truck Plant, the automated inspection system is now being used in the United States at Ford's Kentucky Truck Plant.

"This is one of the most exciting integrations of optical science and digital technology in the automotive industry," said Dougan. "By combining innovations in vision technology, processing speed and software, Ford continues to invent new technologies that give our customers better paint quality and surpass competitor offerings."

Locations
Globally, dirt detection technology is used at three Ford assembly plants. Here are the plants and the vehicles built there:

The technology launches later this year at these plants:

In 2014, Ford will launch dirt detection technology at the following plants:

See also: Watch these Australian Ford and Holden muscle cars duke it out, Ford looks to space robots to improve car-to-car communications [w/video], Alan Mulally talks about why Ford's Falcon had to die.