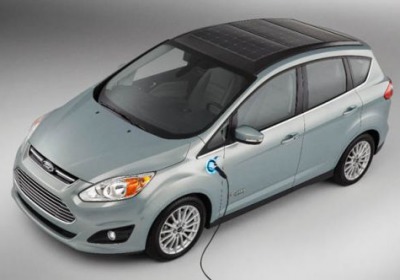 Solar energy might not be enough to power a usable electric vehicle on its own, but that doesn't mean it can't lend a helping hand. And that's what Ford has in store for the Consumer Electronics Show opening next week in Las Vegas.

Ford has essentially taken its C-Max Energi plug-in hybrid and fitted it with the latest in solar panel technology developed by SunPower, acting like a magnifying glass to capture as much of the sun's energy as possible. So you get the benefit of an electric vehicle, with the range assurance of a hybrid, without needing to draw from the grid.

Ford estimates that a day of charging in the sunshine will give the C-Max Solar Energi concept the same full charge as the production PHEV, with a total range of 620 miles – 21 of which can be run on electric power alone. Otherwise the vehicle – which remains a concept for the time being – is identical to the existing C-Max Energi. The top-selling model in Ford's growing hybrid and electric vehicle portfolio helps put Ford just behind Toyota among the top seller of hybrids in America. Scope out the images in the gallery above and the video clip and press release below for a closer look.