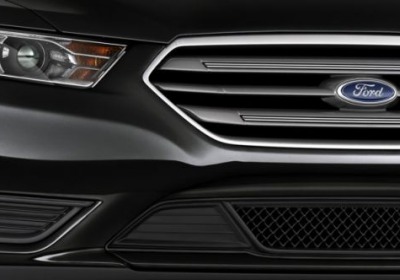 Ford announced its first non-pursuit-rated Police Interceptor ever, based on the Taurus, which employs the smaller 2.0-liter EcoBoost four-cylinder engine in place of similar pursuit-rated Police Interceptors powered by naturally aspirated 3.5-liter and 3.7-liter V6s and the top-spec 3.5-liter EcoBoost V6. Officially called the Special Service Police sedan, the car was commissioned at the request of law-enforcement agencies that desire a more fuel-efficient vehicle for detectives, administrators and campus police, who don't necessarily need pursuit-rated vehicles.

The 2.0-liter EcoBoost engine produces 240 horsepower and 270 pound-feet of torque, but more importantly, it allows the SSP sedan to achieve somewhere in the neighborhood of 22 miles per gallon city and 32 mpg highway, which are the civilian 2.0-liter Taurus' official EPA ratings. Ford estimates that the SSP sedan will get 20 mpg city, 30 mpg highway and 23 mpg combined, with the help of Active Grille Shutters that open to allow more cooling air through to the radiator, or close to optimize aerodynamics and fuel economy. Those numbers compare favorably to the discontinued Crown Victoria-based Interceptor's 14 mpg city and 21 mpg highway and the newer Taurus-based cars equipped with V6s, the most fuel efficient of which gets 18 mpg city and 26 mpg highway.

If it was driven 90,000 miles over the course of three years, a 2.0-liter SSP sedan would save law enforcement agencies $5,042.92 versus the Crown Vic, Ford estimates. The EPA is expected to post official fuel-economy numbers for the SSP sedan in December. Until then, read the press release below for more information.

DEARBORN, Mich., Sept. 18, 2013 – At the request of law enforcement agencies looking to reduce fuel costs, Ford is launching a non-pursuit-rated "special service police" sedan using the 2.0-liter EcoBoost® engine that produces 240 horsepower and 270 lb.-ft. of torque. The special service police vehicle will combine the durability of Ford's Police Interceptor sedan with the fuel efficiency of its 2.0-liter EcoBoost engine.

The EcoBoost engine should help make this special service police sedan the first law enforcement vehicle to achieve 30 mpg or better in EPA highway ratings expected in December. The sedan is a modified version of the 2.0-liter Ford Taurus that achieves 22 mpg city, 32 mpg highway and 26 mpg combined with the standard six-speed automatic transmission.

When driven 30,000 miles per year – not atypical for police agency work – and with gas prices at $3.65 per gallon, the special service police package would save agencies $5,040.92 over three years.

"Not every police officer needs a pursuit-rated vehicle," said Jonathan Honeycutt, Ford police marketing manager. "As agencies look to replace older, V8-equipped cruisers with more efficient cars, Ford is at the ready with the most fuel-efficient – yet still very capable – full-size police vehicle."

The addition of the 2.0-liter EcoBoost engine means agencies will now have four choices of powertrains in the Police Interceptor sedan, including a V6 lineup that outperforms V8 engines of years past.

While expected to be more fuel efficient than the 3.5-liter, 3.7-liter or 3.5-liter EcoBoost variant, the new special service police sedan retains all the essential police DNA that goes into pursuit-rated Police Interceptor sedans, including safety and durability features. Plus it is upfit-friendly and purpose-built. Commonality of parts remains an integral part of the special service police sedan.