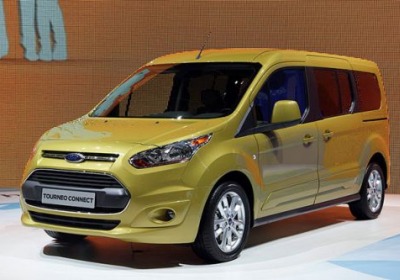 Ford was relatively quiet at the Geneva Motor Show, but it did take the opportunity to roll out its new family of Tourneo vans: the Courier, Connect, Grand Connect and Custom. As the passenger version of the Transit cargo vans, the new range of Tourneo models vary from the B-segment Courier up to the fullsize Custom. The Connect and Grand Connect are based on the redesigned 2014 Ford Transit Connect.

With an overall length just three inches longer than the Fiesta hatchback, the Tourneo Courier seats four to five passengers, and it offers a choice of three engines: the 1.0-liter EcoBoost or two small diesels. Like the 2014 Transit Connect was saw in Paris last year, the Tourneo Connect comes in a five-seat configuration while the Grand Connect can seat seven. Finally, the Tourneo Custom seats up to nine passengers, and it is available in two lengths up to 210 inches long putting it just six inches shorter than a standard-length E-Series van and about a foot longer than the Explorer.

Check out our live image galleries, and be sure to scroll down below for the press release and to watch some videos.

Ford's product-led transformation in Europe accelerates at the Geneva Motor Show to offer customers the freshest product portfolio among its key competitors
New product launches in 2013 alone will refresh 40 per cent of Ford volume in Europe
All-new Tourneo Courier makes global debut at the Geneva Motor Show; completes full lineup of Tourneo people-movers to be launched in Europe by mid-2014
Ford debuts the all-new EcoSport compact SUV for Europe following the recently launched new Kuga; will be joined by the next-generation Ford Edge in the near future
Ford SYNC voice-activated in-car connectivity system availability in 2013 doubles to 60 per cent of the vehicle lineup compared to 30 per cent in 2012
Ford SYNC will be offered in every new Ford of Europe vehicle by 2015
Total EcoBoost petrol engine production will increase by 35 per cent from 2013-2015
To view the Ford press conference live at 13.45CET go to www.gofurtherlive.com

GENEVA, March 5, 2013 – Ford of Europe's product led-transformation accelerates at the Geneva Motor Show this week as the company debuts the all new EcoSport compact SUV and Tourneo Courier – part of Ford's pledge to deliver 15 new global vehicles to Europe by 2015.

Including the recently launched new Fiesta and Kuga, as well as the upcoming EcoSport, Tourneo Connect, Transit Connect and Transit, Ford will refresh more than 40 per cent of its European sales volume in 2013 alone.

"This is the most aggressive product rollout Ford of Europe has ever undertaken and we are leveraging our One Ford global strengths to make it a reality," said Stephen Odell, Ford executive vice president, Europe, Middle East and Africa. "We are transforming our business in Europe by increasing product investment in the toughest of economic times."


The stylish and compact five-seat Tourneo Courier, which debuts at Geneva and launches in mid-2014, offers class-leading interior space and safety features, and expands the Ford people-mover range into the small-car segment.

Flexible and practical all-new EcoSport
Ford expects to sell one million SUVs in Europe in the next six years, an expansion that was kicked off by the launch of the all-new Ford Kuga earlier this year.

The EcoSport SUV that will follow late in 2013 offers space, modern design and smart technology. EcoSport will offer a range of efficient powertrains, including the 125PS 1.0-litre EcoBoost petrol engine -- International Engine of the Year -- a 110PS 1.5-litre petrol engine, and a 90PS 1.5-litre diesel engine expected to deliver class-leading fuel efficiency.

The compact SUV's large front grille, short bonnet and raked front pillars deliver a sporty and contemporary feel, and angular headlamps reinforce the modern look. The small SUV market in Europe is expected to grow by 30 per cent in 2013 compared to last year and SUVs will account for one in ten of all Fords sold in the region by 2016.

Ford also plans to bring to Europe the next generation Ford Edge, a larger and more premium utility vehicle that's popular in the U.S. and other markets.

Connected by SYNC
Ford also will accelerate the rollout of Ford SYNC that was last year offered on 30 per cent of Ford's cars after being launched last year in Europe in the new B-MAX.

In 2013, this will double to 60 per cent as the technology has become available on new Fiesta and new Kuga and later in the year, also will feature on the new Transit Connect, new Tourneo Connect and new Transit. At Geneva, 19 of the 21 vehicles Ford is displaying are connected by SYNC.

Ford has also introduced SYNC with Emergency Assistance that directly connects vehicle occupants to local emergency services operators after an accident. Ford is also announcing that EcoSport will be among the first Ford vehicles in Europe to offer SYNC AppLink, which enables customers to voice-control smartphone apps from the driver's seat. Ford is the first automotive manufacturer to collaborate directly with the leading music streaming service Spotify to bring music streaming service into the car.

By 2015, every new Ford vehicle sold in Europe will be offered with SYNC.

Powered by EcoBoost
Ford's small but mighty 1.0-litre EcoBoost petrol engine was introduced in the Focus in 2012 and production has now been extended to include the new B-MAX, new Fiesta, C-MAX and Grand C-MAX. Of those models, Ford expects that in 2013 one in four will be sold with the 1.0-litre EcoBoost engine.

The 1.0-litre EcoBoost is the smallest member of Ford's European family of EcoBoost engines, which also includes the 1.6- and 2.0-litre four-cylinder variants. From 2013-2015, Ford of Europe will increase total EcoBoost petrol engine production by 35 per cent. In five years, more than 50 per cent of Ford petrol engines in Europe will be turbocharged.

A total of 19 of the Ford vehicles on display at Geneva are powered by EcoBoost. Later this year, Ford will launch its first ever battery electric, zero emissions passenger car, the Focus Electric, with a range of hybrid vehicles set to follow.

"By expanding delivery of vehicles that are equipped with the very latest fuel-efficient powertrain technology and that enable drivers to stay completely connected on the move, Ford is delivering exactly what our customers want," said Barb Samardzich, vice president, Product Development, Ford of Europe.