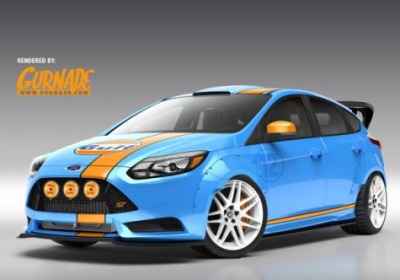 Ford, as we mentioned on Saturday, is pulling out all the stops for November's SEMA show, bringing 57 vehicles to the Las Vegas event. Ford will be staggering the release of its SEMA flotilla, though, so expect to hear a lot about the new additions to the fleet in the weeks to come. We already showed you the Fiesta, Fiesta ST and Mustang models that made up the first batch of SEMA cars. Next up, we have a quartet of modded Focus STs joining Ford's SEMA roster.

Our first Focus ST (pictured above) sports the legendary livery of Gulf Racing. The orange-on-blue scheme, which Ford helped make famous at the 24 Hours of Le Mans, has been updated for 2013, with a more vibrant blue. This ST was built by Universal Technical Institute, while the exterior was done by Neil Tjin of Tjin Edition. Side exhausts, a Vortech supercharger and a Motiv Concepts high-flow cat allow the ST to breathe a bit easier, while Forgestar wheels contrast well with the iconic paint scheme.

Focus ST number two has been done-up by PM Lifestyle and is inspired by "Southern California car culture." Sporting a sleek, pale blue paint job, there's also no shortage of carbon fiber on the car's exterior. The 2.0-liter, turbocharged, four-cylinder engine has been massaged by the likes of Banks Power, COBB Tuning and Ford Racing, while the suspension is wearing a shiny, new set of coilovers and sway bars. The meaty brakes, tucked behind 19-inch, Rotiform wheels, come from Wilwood, while the cabin has been fitted with a pair of Sparco Chrono seats and five-point, Schroth harnesses.


It's back to the historical theme for the third car (pictured right), as it wears the colors of Colin Chapman's legendary Team Lotus. The yellow-on-green theme, which was made famous by Lotus Formula One and Indy cars also comes with some positively retro rollers from American Racing Wheels. Designed by GreenFilter USA, this Focus ST is more of a looker than a runner, retaining mostly stock mechanicals. The suspension has been overhauled by Ground Force, while a custom intake and exhaust, complete with Lotus-style conical exhaust tips, are the only performance modifications.

Focus ST number four has been designed for a program it's easy to get behind - DRAGG, which is like DARE but for gearheads. It stands for Drag Racing Against Gangs and Graffiti, and helps at-risk youths work towards a positive future. As DRAGG is ran by the 5-0, it's only fitting that this ST sports a police livery, complete with light bar, rifle rack, and police decals. A Borla exhaust, Motegi wheels, Eibach springs and Wilwood brakes make it a bit more potent than a stock ST.

All four of these vehicles will be on display at the 2013 SEMA show, in Las Vegas. The show is set to open on November 5 and run until November 8. We'll be live at the show, so be sure to keep your eyes on this space for all the latest SEMA news.