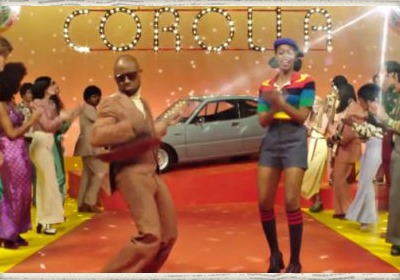 Despite the fact that the Toyota Corolla pretty much sells itself, the eleventh-generation 2014 model is getting a huge marketing push that aims to appeal to both Millennials (of course), as well as the older generations that have lived with the stalwart Japanese compact for decades. The first television advertising spot, called, "Style Never Goes Out of Style," shows that the Corolla has had a place in mainstream culture since its launch in the 1960s. We have to admit, it's pretty cool to see older models from the '60s, '70s and '80s come out to play for this commercial, especially the latter of those, as it gives us enthusiasts fond memories of the infamous AE86.

The whole web/broadcast/print/social media marketing campaign surrounding the 2014 Corolla is called "Elevate," because, according to Toyota:

Extensive market research shows that Millennials are looking to take their career to the next level and are looking to buy their first 'real' car to get them there. The design of the all-new Corolla is significantly elevated from the previous generations, creating a more dynamic and desirable image for the Corolla nameplate that will appeal to these younger buyers.

In our First Drive of the 2014 Corolla, we found it to be a perfectly fine vehicle for the sort of day-to-day, appliance-like tasks it will be asked to accomplish, but in terms of excitement... there isn't any. But since research shows that more and more younger buyers don't really give a hoot about driving, perhaps a shiny new appliance like the Corolla is exactly what they'll be looking for when it comes time to buy a car.

Scroll down to have a look at Toyota's newest commercial for the Corolla, as well as the company's press blast.

Technology Takes Center Stage in both the Vehicle and Advertising Platforms

TORRANCE, Calif. (September 5, 2013) – The world's best-selling vehicle nameplate of all time is about to take drivers to new places. When the 2014 Toyota Corolla hits dealer showrooms this fall, the accompanying marketing campaign will showcase the car's upgraded technology and elevated styling-inside and out. The marketing campaign aims to reach the Millennial generation while still appealing to the baby boomer audience that has made the model so popular through the years.

Developed in partnership with Saatchi & Saatchi LA, the campaign's theme is "Elevate." Extensive market research shows that Millennials are looking to take their career to the next level and are looking to buy their first "real" car to get them there. The design of the all-new Corolla is significantly elevated from the previous generations, creating a more dynamic and desirable image for the Corolla nameplate that will appeal to these younger buyers.

The primary broadcast spot of the campaign, "Style Never Goes Out of Style," focuses heavily on pop culture, especially music and dance, and spans five decades, starting in the late 1960s (coordinated with Corolla's U.S. launch in 1968) and continuing through the present day. The music video-inspired commercials feature an original track by Shy Kidx and the "Elevated" dance choreographed for the campaign by Vincent Patterson and Tony Testa.

"The 'Elevate' campaign speaks to the evolution of the Corolla and Toyota's commitment to delivering exciting products that engage consumers in new ways," said Ed Laukes, vice president of marketing communications, Toyota Motor Sales, U.S.A., Inc. "We're thrilled to debut a fun campaign that reaches a younger audience through social, digital and mobile elements that convey the Corolla's elevated design."

The all-new 2014 Corolla made its global debut on June 6 at an invite-only event in Santa Monica, Calif. The extravaganza celebrated the iconic compact vehicle with nearly 50 years of success and nearly 40 million Corollas sold worldwide.

The 2014 launch represents a dramatic restyling for the 11th generation Corolla. The next generation Corolla makes a stronger design statement, with more dynamic exterior styling, spacious interior and greater sense of craftsmanship. The vehicle's technology offerings have been elevated as well, including standard LED headlamps, Bluetooth audio and available Smart Key System with push-button start.


The vehicle and its corresponding campaign continue the recent momentum set forth by design-focused product launches and build on Toyota's new Let's Go Places brand direction.

The campaign rolls out with a lively :60 broadcast spot on top TV shows and in theaters with Corolla models that date back to the 1960s. It takes viewers through five decades of iconic song and dance in the spirit of an epic music video.

In-cinema ads will feature a Shazam experience and sweepstakes opportunity.

Unique Out of Home

Billboards and outdoor signs in several major markets, including New York and Los Angeles, will have a built-in NFC chip that launches a virtual test drive with the tap of an NFC-enabled smartphone. A special printing process also enables key features to become illuminated during nighttime hours, showcasing the LED headlights.

Mobile-optimized web experiences make shopping for a car more simplified and fun. Mobile iMedia will direct guests to touch.toyota.com/corolla and the "Corolla Touch Drive," a first-of-its-kind virtual driving experience that highlights features of the car through a simulated test drive on a smartphone. In addition, an iAd-based racing game will keep users engaged through exciting game play and reward them for exploring features of the new Corolla with a free music download.

Custom six-second Vine videos and 15-second Instagram videos will showcase tutorials in dance styles through the decades, including the "Elevated" dance moves featured in the broadcast commercials. Viewers will be encouraged to use the hashtag #CorollaStyle to post user-generated content showcasing their "elevated" style.

The all-new 2014 Corolla will be included in a number of ride-and-drive experiences in the coming months that will allow consumers a chance to get behind the wheel and experience the vehicle first-hand. The vehicle will also make appearances at select Toyota-sponsored events and on-site activations.

See also: Toyota says you might have the 40-millionth Corolla ever built, Toyota delves into the history of its Land Cruiser, TMG's super Lexus LS Sports 650 gets track tested.