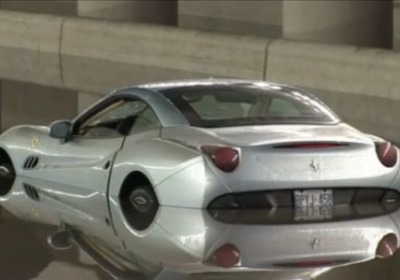 A Ferrari might be the last vehicle you'd want to be driving when streets are submerged in water, but Toronto lawyer Howard Levitt was unfortunate enough to be behind the wheel of his $200,000+ Ferrari California when the tunnel he was driving through started to fill up. It was July, when parts of the Canadian city were flooded, but he was determined to make his flight to a court appearance the next day. So Levitt abandoned his metallic blue supercar in the middle of the street and took a cab to the airport, the National Post reports.

The car subsequently was totaled, and the insurance company covered the damage, so after completing his court assignment (and a column for the Financial Post that was due the same day), Levitt began to search for a replacement for his California - driving his 1994 Dodge Viper in the meantime. He decided on a 2014 California in the same metallic blue to replace his 2010 model. When he approached Ferrari to put in an order, the Italian marque was waiting for him, having heard of his mishap. The company offered him a "very generous" deal on a 2014 model; an undisclosed amount less than the after-options retail price of around $300,000.


The new Ferrari is expected to be delivered to Levitt in November, and we can only hope another flood doesn't catch him off guard. We're not so sure Ferrari would offer him another "very generous" deal. Feel free to watch the short video below, despite its rather static nature, which we included to precisely show the sad fate of Levitt's fallen California.