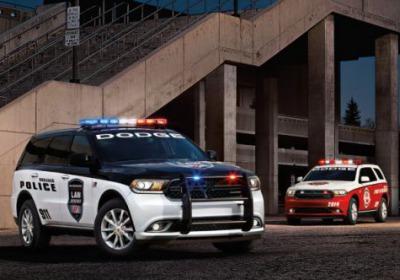 Straight off its refresh, the Dodge Durango is slipping back into its dress blues and getting back to work. The 2014 Dodge Durango Special Service Vehicle boasts all the refinements and improvements that the refreshed, civilian-spec model received, most notably a 15-percent improvement in fuel economy.

Designed for police and fire departments, and as Chrysler's answer to the Ford Police Interceptor Utility and Chevrolet Tahoe PPV in the growing service SUV market, the Durango boasts a 600-mile range, thanks to the addition of an eight-speed automatic, available on both the 3.6-liter Pentastar V6 and 5.7-liter Hemi V8. Equipped with the 360-horsepower Hemi, the Durango SSV can tow up to 7,400 pounds (the V6 is limited to 6,200 pounds).

Police and fire department Durangos get a few special features over the civilian models. The electric systems are ruggedized, with a heavy duty battery and a 220-amp alternator in place, while the engine's water pump and oil cooler are both stronger. The brakes are tougher, and a load-leveling suspension has been fitted, too.

It's unclear when the Durango SSV will be made available for ordering, or how much it will cost taxpayers when it arrives. This is the third service vehicle produced by the Chrysler Group, joining the Dodge Charger Pursuit and Ram 1500 Special Service.

October 17, 2013 , Auburn Hills, Mich. - Police and fire agencies and general fleet customers across the United States and Canada in need of a full-size SUV with best-in-class power and utility to provide emergency support need look no further than the new 2014 Dodge Durango Special Service. The 2014 Dodge Durango Special Service delivers the perfect combination of capability, fuel economy and utility with a new standard eight-speed transmission, improved fuel economy up to 25 miles per gallon and the ability to tow as much as 7,400-pounds. Featuring class-leading utility and driving range of over 600 miles, and a whole host of safety technologies, the new Dodge Durango Special Service will meet the needs of a wide range of fleet customers.

In addition to the many features standard on the new Durango, the Special Service model also features additional components designed for the rigors of daily fleet use, including a heavy-duty brake package, heavy-duty battery, larger-output 220-amp alternator, heavy-duty water pump and engine oil cooler and a load leveling suspension.

The Dodge Durango Special Service will be built at the Jefferson North Assembly Plant in Detroit. Chrysler Group fleet operations will start taking orders now, with production expected to begin in the fourth quarter of 2013.

A customizable rear cargo area with under-floor storage compartments and additional storage in the side compartments is unique to the Durango Special Service. Further modifications include a special service headliner and red and white interior dome lamp and spot lamp wiring prep. The Durango's third-row of seats is removed to provide fleet customers more cargo capacity. Even with the deletion of the third row, the second row maintains separate air conditioning and heat controls.

These modifications make the already stout Durango more than capable of handling daily fleet use.

Named one of Ward's 10 Best Engines for three years, Durango's standard 3.6-liter Pentastar V-6 engine is paired with the new standard eight-speed transmission and generates an impressive 290 horsepower (295 horsepower on Rallye and Citadel) and 260 lb.-ft. of torque, and can tow up to a best-in-class 6,200 pounds. The V-6 powered Durango also features a best-in-class driving range of over 600 miles on a tank and up to 25 miles per gallon.

The available 5.7-liter HEMI V-8 engine produces a best-in-class 360 horsepower and 390 lb.-ft. of torque with a best-in-class tow rating of 7,400 pounds. The 5.7-liter engine's Fuel Saver Technology with cylinder-deactivation seamlessly alternates between smooth, high-fuel-economy four-cylinder mode when less power is needed and V-8 mode when more power is in demand. Models with the HEMI V-8 engine achieve up to 23 miles per gallon.

The new instrument panel features a redesigned center stack that houses the new 5-inch and 8.4-inch Uconnect touchscreens. The bottom of the center stack houses a new media hub with an SD card slot, USB outlet and auxiliary jacks, as well as a storage bin. The new center console features a new segment-first rotary shifter for the standard eight-speed automatic that adds another level of refinement over the traditional gated automatic shifter. Manual shift functions have moved to paddle shifters on the back of the Durango's new steering wheel.

The instrument cluster has also been given the high-tech treatment and now includes a full-color 7-inch thin-film transistor (TFT) screen similar to the one found in the all-new Dodge Dart. Standard on all models, this screen allows for drivers to customize more than 100 ways how information is presented.


About Dodge Brand
The Dodge brand is tearing into its centennial year with a keen eye focused on the future and a desire to create vehicles customers can't wait to drive and are proud to park in their driveways. With 100 years of history, Dodge is building on the technological advancements of the '30s and '40s, design evolution of the '50s, the racing heritage of the '60s, the horsepower of the '70s, the efficiency of the '80s and unbelievable styling of the '90s as it paves the road to its future. New for 2014, the Dodge Durango "is kind of a big deal," with a new eight-speed transmission that delivers up to 25 miles per gallon on the highway, a new 8.4-inch Uconnect Touch infotainment center and best-in-class power, towing and fuel economy, in addition to its class-exclusive technology. The new Durango joins the new 2014 Dodge Dart with its new 2.4-liter Tigershark engine, as well as the 2014 Avenger, Challenger, Charger, Journey and a 30th Anniversary Grand Caravan. This 2014 Dodge lineup includes five Insurance Institute for Highway Safety (IIHS) Top Safety picks and Top Safety Pick +, five vehicles with best-in-class power, seven vehicles that deliver 25 miles per gallon (mpg) or higher, three vehicles that deliver 31 mpg or higher and three vehicles that offer seating for seven.