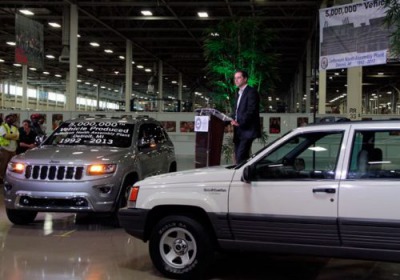 Chrysler's Jefferson North Assembly Plant opened in 1992 for production of the first Jeep Grand Cherokee, but in the subsequent years, the Detroit plant has gone on to produce some of the company's biggest SUVs including the Jeep Commander and Dodge Durango. Earlier this week, the plant produced its five-millionth SUV, which, fittingly, was a Grand Cherokee.

Celebrating the plant's five-millionth unit, the silver 2014 Grand Cherokee was promptly donated to the USO. In addition to this milestone SUV, Chrysler also had a near-perfect 1993-95 ZJ Grand Cherokee on hand for the photo op. Scroll down for the Chrysler press release as well as a video showing some of the speeches from the celebration.

Located in the heart of Detroit, Chrysler Group's Jefferson North Assembly Plant (JNAP) has been pumping out vehicles since 1992 and today it celebrated a significant milestone – the five millionth vehicle to roll off the assembly line.

The Billet Silver 2014 Jeep® Grand Cherokee Overland, with Chrysler Group's Senior Vice President of Manufacturing Scott Garberding behind the wheel and UAW Assistant Director Virdell King riding shot gun, made its debut during a celebration at the plant before finding a permanent home with the United Service Organizations (USO).

To mark the occasion, 50 JNAP employees who have 30 or more years of service and most likely touched nearly every one of those five million vehicles, as well as the plant's Veterans Committee were in attendance.

"Twenty-one years ago, the first Jeep Grand Cherokee rolled off this assembly line and while it was questionable whether we would ever make it to this point, the people in this plant never lost their focus," said Garberding. "Certainly many things have changed over the years, but one thing has remained constant – the dedication and commitment of this workforce.


"I had the privilege of being plant manager here in 2000, working alongside this very skilled workforce. Now as the head of manufacturing, I continue to be impressed by the commitment that is demonstrated here every day. As sales of the Grand Cherokee continue to increase to record levels, we are asking our employees to do more and they have responded by rising to the challenge. They are the heart and soul of this plant and this company, and have been entrusted to build a vehicle that is critical to the continued success of Chrysler Group," said Garberding.

To keep up with the increasing demand, 1,100 new employees were added at the three-million-square-foot facility in October 2012 to implement an alternative work pattern, running three crews, working two 10 hour shifts, six days a week. The plant currently employs nearly 4,500. In 2012, the plant produced 291,403 vehicles.

"This plant and this workforce are shining examples of what can be achieved when there is a common goal and a united spirit," said the UAW's King. "Together, management and labor have persevered to implement a culture change that has allowed us to reach this significant milestone. We look forward to producing the next five million vehicles and building on the legacy that has been established at this plant with the support of the next generation of autoworkers."

Jeep brand donates five millionth vehicle to USO
The Jeep brand will donate the five millionth JNAP-built vehicle – a 2014 Jeep Grand Cherokee Overland – to the USO, as part of a multi-faceted partnership that continues the Jeep brand's commitment to the military by providing support and aid to returning U.S. military heroes. Earlier this year, the Jeep brand announced that it will donate more than $1 million in vehicles and funding to the USO to be used in programs that directly support returning service members and their families.

"In 1991 when this plant was built and preparing to produce the first Jeep Grand Cherokee, the USO was celebrating its 50th anniversary of supporting our troops, so it seemed obvious to us at Jeep that the perfect way to mark this milestone was by donating a new 2014 Jeep Grand Cherokee to our partners at the USO," said Mike Manley, President and CEO – Jeep Brand, Chrysler Group LLC. "The USO and Jeep – both founded in 1941 – share a common history and commitment to supporting our military men and women. We're honored to support the USO as they continue their dedication to lifting the spirits of American troops and their families."

The vehicle will be outfitted with a commemorative plaque indicating its special place in the Company's history and signed by Chrysler Group Chairman and CEO Sergio Marchionne.

Twenty-one years of vehicle production at Jefferson North
Chrysler invested $1.2 billion to bring the first Grand Cherokee to market, which included vehicle research and development, vehicle engineering, and construction of and equipment for the new Jefferson North plant. The groundbreaking for the new plant was on May 31, 1989. The first Jeep Grand Cherokee rolled off the line on Jan. 14, 1992.

In addition to the Jeep Grand Cherokee, Jefferson North also produced the Jeep Commander from 2005-2010 and began production of the Dodge Durango in December 2010.

The former Jefferson Assembly Plant, built in 1907 by Chalmers Motor Car Company, was twice the size of the new plant's original footprint (3.6 million square feet compared to 1.75 million square feet, respectively) and produced a total of 8,310,107 vehicles in its 83-year history.