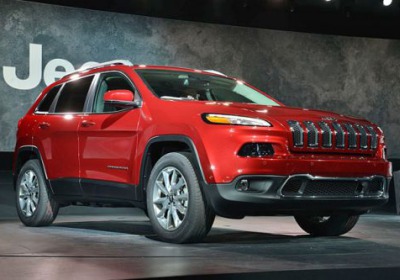 Preliminary first-quarter results from 2013 have been announced by Chrysler, and the company is reporting a net income of $166 million on revenue of $15.4 billion. Compared to this period last year, net income is down $307 million and revenue has dropped $1 billion.

Chrysler says that its quarter was negatively affected by the costs associated with launching its 2013 Ram Heavy Duty, 2014 Jeep Grand Cherokee and preparation for the return of the all-new 2014 Jeep Cherokee pictured above. The launches should provide a strong second half of 2013, says the automaker. "We remain on track to achieve our business targets, even as the first-quarter results were affected by an aggressive product launch schedule," said Chrysler Group LLC Chairman and CEO Sergio Marchionne.

On a positive note, the automaker says worldwide vehicle sales are up 8 percent from one year ago, a number pushed by a 12 percent bump in U.S. retail sales. In addition, domestic market share has risen slightly, up to 11.4 percent from 11.2 percent last year. Read more in the official statement below.

Modified Operating Profit Was $435 Million, From $740 Million a Year Ago, and Free Cash Flow Was $356 Million on Lower Shipments As Key Products Launch

Group Confirms Guidance for the Year

* Modified Operating Profit(a) was $435 million in the first quarter, down from $740 million a year earlier, with shipments improving each month of the quarter as the Company executed the launches of the 2014 Jeep Grand Cherokee and 2013 Ram Heavy Duty pickup trucks

* Worldwide vehicle shipments were 574,000 for the quarter, down from 607,000 a year ago, principally due to 31,000 fewer Jeep Liberty shipments as production ceased during 2012 in preparation for the production launch of the all-new Jeep Cherokee in the second quarter

* Strong worldwide vehicle sales for the first quarter of 563,000, up 8 percent from a year ago, were driven primarily by a 12 percent increase in U.S. retail sales

* Chrysler Group confirms its guidance for the year, including worldwide shipments of 2.6 million to 2.7 million, Modified Operating Profit of approximately $3.8 billion and net income of approximately $2.2 billion

April 29, 2013 , Auburn Hills, Mich. - Chrysler Group LLC today reported its preliminary 2013 first-quarter results, including net income of $166 million on revenue of $15.4 billion. As anticipated, the quarter was negatively affected by the reduced vehicle shipments that resulted from key product launches, namely the 2013 Ram Heavy Duty trucks and the 2014 Jeep Grand Cherokee, as well as preparation for the second-quarter production launch of the all-new 2014 Jeep Cherokee. These actions are expected to position the Company for a strong performance in the second half of 2013. The first-quarter results mark the Company's seventh consecutive quarter of positive net income, reflecting continued improvements in product acceptance, pricing discipline, and market share.

"We remain on track to achieve our business targets, even as the first-quarter results were affected by an aggressive product launch schedule," said Chrysler Group LLC Chairman and CEO Sergio Marchionne. "This quarter underscores the importance of an unwavering commitment to execute flawless vehicle introductions to reach our full potential. While the task ahead this year is daunting, we remain committed to our overall targets, including a minimum shipment increase of 8 percent and a Modified Operating Profit of $3.8 billion."

Revenue for the quarter was down 6 percent from $16.4 billion in the first quarter of 2012. The anticipated reduction was primarily attributable to lower shipments in the quarter due to the end of Jeep Liberty production in 2012 in preparation for the all-new 2014 Jeep Cherokee production launch in the second quarter, and the ongoing launches of the new 2014 Jeep Grand Cherokee and 2013 Ram Heavy Duty trucks. In addition, international shipments declined year-over-year due to continued economic weakness in Europe and import restrictions in Latin America.

Modified Operating Profit was $435 million, or 2.8 percent of revenue, in the first quarter, versus $740 million reported in the prior year. The decrease was attributable to reduced shipments, industrial costs related to the new vehicle launches, and a foreign currency exchange loss related to the February 2013 devaluation of the Venezuelan bolivar fuerte relative to the U.S. dollar, partially offset by continued favorable net pricing in North America.