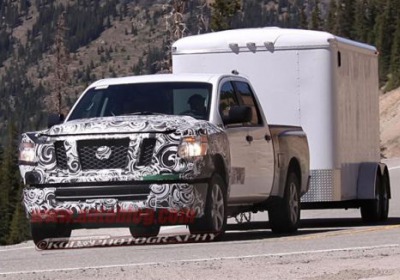 It's no secret that the fullsize pickup truck market is dominated by offerings from Detroit's Big Three automakers, the Nissan Titan and Toyota Tundra not able to outdo the Ford F-150, Ram 1500 or Chevy Silverado/GMC Sierra twins. A great deal of that has to do with the fact that, while the American trucks have all undergone evolutionary updates that include a range of body styles, fuel-efficient engines and excellent technology, the Japanese offerings are, well, really old. Toyota is offering an updated Tundra for the 2014 model year, and while we haven't driven it yet, we're already betting that it's still behind the pack in terms of competitiveness – the 2013 model placed fifth out of sixth in a recent PickupTrucks.com comparison test.

At the bottom of the pack lies the Nissan Titan, a truck that hasn't received any sort of substantial update since its introduction nearly ten years ago. But that's going to change – a new truck is slated to debut for the 2015 model year, and these spy shots of a Titan mule clearly show that things are moving forward.


While this tester relies heavily on the current truck's bodywork for testing purposes, the new Titan will have a revised design, some of which is evidenced by the bug-eyed front fascia of this mule. No, the production model isn't going to look all weird (we hope), but the higher, more outboard headlight placement suggests that the new truck will be a bit wider than the current model.

Earlier reports have suggested that the new Titan will offer an increased range of powertrains and bodystyles, including, for the first time, a Regular Cab option. In addition to V8 power, V6 models will be available, and a Cummins diesel engine is rumored to be in the works for the Titan, as well. We still have another year or so before the new Titan debuts, so stay tuned for more details. We just hope this refresh will be enough to move Nissan's truck up from bottom-of-the-pack status.