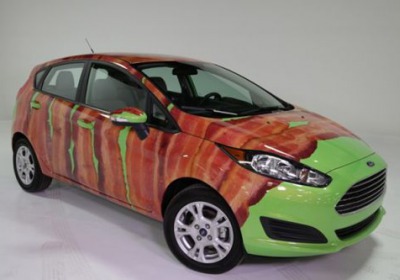 This is a bacon-wrapped Ford Fiesta. It is a real thing, that a real, multi-billion-dollar company designed. And it isn't even April Fools' Day. Designed for International Bacon Day, which is also apparently a thing, the 2014 Fiesta is finished in Green Envy paint - we're told black paint, like the color of a skillet, made the car look camouflaged - and features 10 gigantic decals depicting strips of tender, cured bacon.

The design, which was approved by the CEO of Benton's Country Hams, Allan Benton, show off the depth of Ford's Custom Graphics program. Unbelievably, Ford will actually start offering bacon decals to everyday customers, including (and we can't believe we're writing this) dual bacon racing stripes which will no doubt have Carroll Shelby spinning and/or salivating in his grave, and a "side of bacon," which wraps a couple of strips over the rear wheels.

Benton, who Ford claims is the King of Bacon, had this to say: "This car just makes so much sense." The Fiesta's marketing manager, Liz Elser added, "It's just awesome to drive down the road in a piece of bacon."

• Allan Benton, CEO of Benton's Country Hams and producer of what some consider the world's greatest bacon, proudly approves the design


DEARBORN, Mich., Aug. 28, 2013 – Bacon has been a cornerstone of cuisine since ancient Rome. In recent years the cured meat has transformed from a food to a lifestyle – inspiring everything from medical supplies to plush toys. Now, with International Bacon Day just around the corner, Ford is savoring the salty side dish with the introduction of what is believed to be the first bacon-wrapped car – a 2014 Ford Fiesta.


Ford is announcing the availability of custom bacon graphics that pork purists can have installed on their new Fiesta. The small car synonymous with fun and individuality is hitting dealerships around the country.

"In the 40 years I've been in this business, I've never seen so much interest in bacon," said Allan Benton, CEO of Benton's Country Hams. "It's being used in bourbon, chocolate, ground beef, caramel corn and whatever else you can think of. This car just makes so much sense."

The pièce de résistance is the full "Bacon Wrap" – 10 giant strips of delicious bacon rolled around the entire Fiesta for a carb-free ride. Benton, known as the King of Bacon among venerable food writers and chefs, personally approved the design, and has deemed the bacon-wrapped Fiesta good enough to eat – and drive.

"You can only imagine that a hillbilly from Tennessee is pretty happy to hear about a Ford wrapped in bacon," said Benton. "I expect there will be some real excitement among the young city crowd."

Other options from the bacon-wrap Fiesta menu include:
• Bacon Racing Strips – two pieces of bacon that go on the car's hood and resemble classic dual racing stripes
• Side of Bacon – two individual strips of bacon that wrap over rear wheel – popular among those on a diet

"It's no secret that bacon inspires a lot of passion, and that's what the Fiesta celebrates," said Liz Elser, Ford Fiesta marketing manager. "Our customers have a hunger for self-expression. Plus, it's just awesome to drive down the road in a piece of bacon."

While the bacon-wrapped Fiesta has all the looks of indulgence, it's incredibly lean at the pump – with an EPA-estimated rating of up to 41 mpg on the highway. And unlike bacon grease, nothing gets sizzled away from the Fiesta interior, with technology and features worthy of a blue ribbon at any county fair.

The bacon graphics are just a few custom exterior vinyl graphics Fiesta buyers can have installed on their ride to express their personalities. The wraps are produced by Ford Custom Graphics, along with 3M Original Wraps, and are available at www.fordcustomgraphics.com.