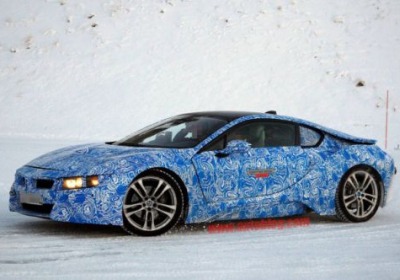 According to Edmunds, BMW will reveal its production i8 hybrid sports car at the Frankfurt Motor Show next month. The i8 is the second vehicle to come from the automaker's new "i" initiative, following the debut of the smaller i3 hatchback last month.


The BMW i8 makes its debut nearly four years after the original Vision EfficientDynamics concept bowed at the Frankfurt expo in 2009. The production car is expected to use a 1.5-liter three-cylinder engine that drives the rear wheels, coupled to an electric motor that drives the front wheels. Combined output is said to be something like 393 horsepower and 406 pound-feet of torque, based on our earlier reports. The i8 is also expected to be very light, with curb weight coming in somewhere around 3,125 pounds. Finally, the i8 is said to have a pure electric range of 20 miles, and should be able to hit 62 miles per hour in just under five seconds.

Other publications had the chance to ride along in the i8 (in prototype form) and came away impressed. We're hoping we'll feel the same when the car officially goes on sale sometime in early 2014. Stay tuned for more at the i8's official unveiling in just a few weeks.