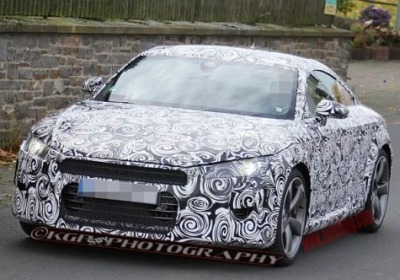 It's no big surprise that Audi is working on a new TT. It's been rumored for a while now, and the current model has been on the market since 2006, making it seven years old. But after seeing only some test mules wearing the existing model's sheetmetal, this is the first glimpse we've gotten at what Audi has in store for it's third-gen TT.

Not that we can see all that much with all the camouflage, mind you, but that's still more than we've seen until now. Spied on public roads being benchmarked against the Mercedes-Benz SLK and BMW Z4, the upcoming new TT is still unmistakably a TT, but looks poised to adopt more contemporary styling in keeping with Audi's latest design language, including a larger grille aperture and more squared-off headlights.

The whole thing looks a bit more like a mini-R8, which would make sense if Audi has called off plans for an R4 sports car to slot into the lineup as well. Last we heard, the new TT would arrive late in 2014, when you can bet we'll read all about slightly more powerful but significantly more frugal engines and a raft of new technologies.