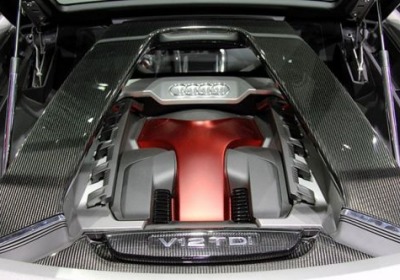 According to a report by Autocar, all we thought we knew of the in-development Audi supercar we might not actually know. A piece in Car and Driver, not even a month old, said the diesel-hybrid halo car was in the design stages, would get the engine from the R18 E-Tron Quattro and its carbon fiber tub. Now we get word that that while the coupe is indeed being designed, it hasn't yet been signed off and there's no business case for it yet. Said business case, whenever it is built, is also dubious of the diesel aspect of the car at the moment – diesels aren't known for creating Pavlovian purchase responses in buyers in the two key markets of the US and China.

The report suggests that instead of a diesel, the 2014 Le Mans regulations changes "could swing the favour back towards petrol models," which would give the so-called Scorpion a better tie to racing technology. Of course, that also assumes that Audi would contest next year's Le Mans with a gas-powered car. If so, that would be an about-face on the original reasons for the halo sportscar in the first place.


In other news, seems Audi also believes it can slot another sportscar below the R8, it just needs to get the financials sorted. The R4 – a Porsche Boxster-sized roadster – that has been chattered about for years is still in on the table but appears a long way off. Company R&D chief Wolfgang Durheimer said it would need to be mid-engined and bring plenty of tech to separate itself from the TT, but mass-market price point is the catch as is the focus on other segments in the portfolio.

The least sexy side of the Audi pool, but apparently the most important, is boiling with plans for new utility vehicles and possibly an MPV. What Car? quotes Durheimer at the Shanghai Motor Show saying "SUV products are a first priority," which would fit into what we've been hearing about the brand's design overhaul, the products in question a Q above the Q7 and another below the Q3. A people mover is also said to be under consideration assuming Audi can create something that hauls six or seven while maintaining brand values.