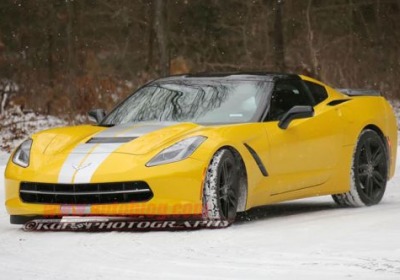 When are stripes more than just stripes? Follow up question: Is the product development team at Chevrolet really cocky enough to hide the next C7 Corvette variant in plain sight? This very recently spotted, and ostensibly obscured C7 asks a lot more questions than it answers, but there's at least some evidence to support that it might be the next Corvette Grand Sport.

The first and most obvious tip-off that something is up with this 'Vette revolves around those silver stripes. Obviously the stripes themselves don't necessarily denote a new model. However, when Chevy recently launched its "colorizer" website for the Stingray, there was no provision made for racing stripes – solid colors only.

Grand Sport exhibit number two is actually an incriminating lack of badges. The production Corvettes we've seen to date have all carried Stingray badges on their fenders, just behind the vent. The car seen in these images has no such badges, which is an intriguing omission on an car that looks like a production-spec vehicle otherwise.


The last clue is a subtle one, picked up on by the same spy photographers that have been following C7 prototypes around for ages now. There's a full car cover in the cargo area of the Corvette in these photos – that's an item that all of the other prototype 'Vettes carried as standard equipment – to thoroughly hide them from prying eyes when they needed to be parked outside.

Any one of these differences spotted on a manufacturer-driven 2014 Corvette would be easily brushed off as an anomaly, but taken as a whole there could be something else there. What say you? Is this the next Corvette Grand Sport we're looking at, or just some stripes and a pile of wishes? Share your thoughts, in comments.

See also: Official USPS Muscle Cars stamps coming to a mailbox near you, GM won't sell 2014 Chevrolet SS in Canada, Chevy might've pulled out of NASCAR if it weren't for new Gen 6 car.