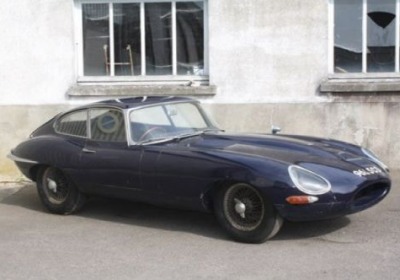 The 40th Jaguar E-Type ever built, a right-hand-drive 1961 model, hit the auction block and was bought by an anonymous British buyer for 88,000 pounds ($141,310), ITV reports. The Jaguar had been stored at the previous owner's estate, in dry storage, at a derelict farm in Le Mans, France since July 1974.


E-Type chassis No. 860040 was bought by the previous owner in 1969 and was originally gray. But it was driven home to France and painted it in its current aubergine in 1974, before it was put into storage. During that time it was considered missing by experts, but there it sat under a dust sheet car cover for most of its life, so the body is in good condition. The family mechanic said that the car was last started about five years ago, and the engine recently was turned over. Coys auction house describes the original interior, which is also preserved well, as a "time warp."