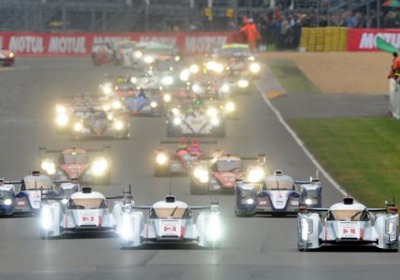 There was little usual about this year's 24 Hours of Le Mans – intermittent rain in the weeks before the race meant cars didn't get on track as much as they wanted, and intermittent rain during the race meant cars went off track a lot more than they wanted. The race started with a wet track, and one of the records broken because of the random downpours was the number of times the safety car led the field – 11 times this year – although the record of two hours and 53 minutes of lapping behind the safety car, set in 2011, was not eclipsed.

None of that served to dampen the action. With little more than an hour left in the race there were cars still only a few seconds apart fighting for position, leads still changing because of pit stops and everyone drafting anyone they could.

Things didn't go the usual way up front, either – well, not exactly...

That second-place car with the first number has won the race for the past two years, and once the pace car pulled off to let the race begin Lotterer pulled around McNish through the Dunlop curve and led the race just a few hundred meters into the first lap.

After all the drama of regulation changes after the World Endurance Championship race at Spa to get Toyota more performance relative to the Audis – in addition to the performance modifications, Toyota was also granted a larger fuel filler so it could top its 76-liter tank more quickly – and the questions about sandbagging, Nicolas Lapierre doing the first stint in the No. 7 Toyota, starting fifth, took off like buckshot, getting past teammate Anthony Davidson in the No. 8 Toyota and the other two Audis and challenging for the lead. Davidson would follow, putting the Toyotas into second and third behind Lotterer.

This was the Toyota from the end of 2012, the one that conquered Audi in the last four races of the WEC season. There were two problems, though: the pace was killing their fuel strategy, and Lapierre's TS030 suddenly started having problems; from attacking for the lead he was then three to four seconds off the pace, and in the third hour his car stopped just beyond the first chicane on the Mulsanne straight. He got it going again and didn't pit when he came around, but something was wrong.

That would be the case with the No. 1 and No. 3 Audis, too. The aerospace-grade racing machine from Ingolstadt would encounter a generator issue on the No. 1 R18 e-tron quattro that took 12 laps – 43 minutes – to fix. When it resumed racing it was in 24th and, short of some deus ex machina, not going to win the race a third time in a row.

The No. 3 car suffered a puncture coming out of the pits almost seven hours in, but after doing a lap on three tires was only in the pits for a jiffy. However, Gene would later bring it back in reporting several problems, and it dropped back to sixth due to the repairs – in fact, all of the Audis would report problems with vibration in various parts of the race.

Car No. 2 took the lead in the seventh hour of the race and, in spite of lead changes due to differing pit strategies in the beginning, never gave it up. Kristensen would lap the slower Toyotas in the seventh hour, the No. 7 car having several offs with Lapierre and Nakajima at the wheel. Nakajima had a nasty incident Sunday morning at the Dunlop Curve, then Lapierre put the car in the barriers at the Indianapolis with a little more than an hour left in the race and in the pouring rain. Somehow, he got the car extricated and the bodywork pulled off and got it back to the pits.

For much of the race it looked like the Toyotas would take second and third place, but the woes of No. 7 gave the No. 3 Audi a chance to retake third position. Kristensen crossed the line first in Audi No. 2, followed by the No. 8 Toyota driven by Davidson (his co-drivers Stephane Sarrazin and Sebastien Buemi) in second, Audi No. 3 in third with Gene at the wheel. The No. 1 Audi managed to claw back fifth place, driven by Lotterer at the end.

The privateer Strakka Racing HPD LMP1 car finished sixth, driven by of Jonny Kane, Danny Watts and Nick Leventis. The No. 13 Rebellion Racing Lola was taken out of contention by a gearbox issue that took forever to repair, the No. 12 Rebellion was taken out by a huge crash with Andrea Belicchi at the wheel.


In LMP2 the No. 24 Nissan-powered Oak Racing Morgan driven by Olivier Pla, Alex Brundle and David Heinemeier Hansson and the No. 35 sister car piloted by Bertrand Baguette, Ricardo Gonzalez and Martin Plowman battled throughout the race for the lead along with the No. 26 G-Drive/Delta-ADR ORECA-Nissan driven by Mike Conway, John Martin and Roman Rusinov. The No. 35 had started four rows behind the category leader No. 24 car on the grid, and even though Olivier Pla in the No. 24 took the lead early and fought to hold it against the G-Drive Nissan, Bertrand Baguette in the No. 35 Morgan was having none of it and got himself into the fight. With just 72 minutes left in the race Baguette was leading LMP2, with Pla behind and Conway in the G-Drive Nissan in third but two laps down. Baguette spun but he didn't lose the lead, the three cars finishing in that order. Jann Mardenborough in the Greaves Motorsports Zytek Nissan would finish fourth; a scion of Nissan's GT Academy, he was trying to finish on the podium in his first Le Mans like his co-driver Lucas Ordonez did in 2011.

In GTE Pro, the three cars that would battle throughout the race until a couple of hours before the finish had been bunched up together in the first safety car period occasioned by Allan Simonsen's accident. Everyone else in the class was penalized by the method used at Le Mans, which breaks the field into three groups behind the three different safety cars and can put huge gaps in between racers if they don't happen to fall in behind the same safety car.

The No. 97 Aston Martin Racing (AMR) Vantage GTE was practically chained to the No. 99 AMR and the No. 92 Porsche factory team (using the new 991 RSR race car) and out for a good result on the carmakers 50th anniversary, just a year before it returns to the LMP1 class. The No. 92 Porsche would work its way up into the fight, but not before Frederic Makowiecki in the No. 99 Aston Martin turned in a monster performance during his stints to claim the lead from his sister team car. He, Bruno Senna and Rob Bell kept the car looking like a sure shot for the top step at the flag, until Makowiecki got loose at the second Mulsanne chicane with just over five hours to go and hit the barriers, tearing the car apart. He was unhurt.

A strategy battle developed during a rain and safety car period, and the Porsches won it. Changeable weather conditions had the two Porsches on two different kinds of tires, and when the No. 97 Aston Martin pitted about an hour before the end of the race, wet tires were put on, then they were immediately taken off and slick tires were put on. One of the Porsches was on slicks, the other on wets, and everyone awaited the battle to see which car was right. However, a suspension issue was discovered on the No. 97 Aston Martin during that same pit stop and it lost too much time to be a factor in the run to the end. The No. 92 Porsche would take the class from the No. 91 Porsche, followed by the No. 97 Aston Martin.

Kristensen's LMP1 win gives him nine Le Mans victories, breaking his previous record of eight victories. It is the 12th time Audi has won the race in 14 tries. McNish took a third win, and Loïc Duval won on his first try. Kristensen drove 348 laps, one lap more than the second- and third-placed cars. The winner pitted 34 times, Davidson in the Toyota pitted 30 times, the same number as the third-placed Audi, and the fourth-placed No. 7 Toyota pitted 29 times.

The highest placed Corvette C6-ZR1 in GTE Pro was the No. 73 in fourth, then the No. 74 driven in seventh, followed by the No. 53 SRT Viper GTS-R and the No. 93 Viper. The Corvette's put in some competitive times during the race, they just couldn't do it consistently. The Vipers, in a development year, ran well when they were running, but were – yes, we've got to say it – snakebit when it came to mechanical issues. The first Corvette in GTE Am was the No. 50 Larbre Competition car in fifth, the No. 70 Larbre Competition car in tenth. Patrick Dempsey's No. 77 Porsche GT3 RSR finished fourth in GTE Am. Special mention goes to Alexander Rossi in the Caterham, the American test driver for Caterham's Formula One team, who put in a strong performance after a suspension issue. Special mention in the opposite direction goes to Romain Brandela in the No. 39 DKR Lola-Judd, who was apparently taping an episode of Jackass and took far too many opportunities to spin and hit other cars. The return of Alpine (as a Signatech Nissan) didn't make the splash they wanted, the LMP2 car finishing ninth among 13 in-class finishers. More than 50 individual barrier pieces were replaced during the race, each repair causing extended bouts of the safety car.

That's the report for this year. Next year it'll be Audi, Toyota and Porsche at the head of the pack, and we heard rumors that a fourth manufacturer intends to join for next year's start. The battle has already begun.