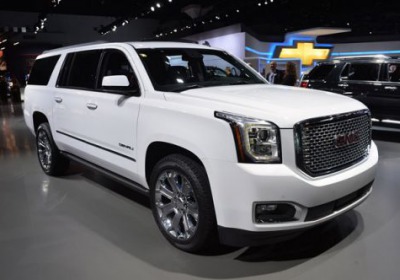 The Yukon is will come to market with a pair of engines. The base 5.3-liter V8 pumps out 355 horsepower and 383 pound-feet of torque, while the higher-end models benefit from the same direct-injected, 6.2-liter V8 as the Escalade. That engine makes 420 horsepower and 450 pound-feet of torque, with fuel economy seeing a likely boost thanks to an active fuel management system. Like the Tahoe, Suburban and Escalade, the Yukon takes advantage of a six-speed, column-mounted automatic transmission.

The cabin has seen significant upgrades in terms of materials and technology, with an eight-inch touchscreen display and IntelliLink standard in both Yukon and Yukon Denali. Fold-flat second and third-row seats come standard, while a power option is available, as well. Other techy features include active noise cancellation and standard Bose stereos.

Scroll down for the full press release from GMC, and then take a look up top for our full gallery of live images from the floor of the 2013 Los Angeles Auto Show

Bold styling and advanced technologies – including new safety and security technologies – support Yukon's greater capability, while a more comprehensive list of standard features and enhanced infotainment options are designed to broaden the appeal of one of the industry's most-popular full-size SUV lineups. Combined Yukon/Yukon XL and Denali sales were up 24 percent for the eight months of 2013.

"We've engineered the Yukon and Yukon XL from the ground up, building on a strong legacy of capability to take them to the top of the segment with exceptional refinement and purposeful technology," said Tony DiSalle, vice president of GMC Marketing. "And when it comes to the tasks people rely on a full-size SUV for, they do it better than ever – and with more style."

"Although they are based on a similar architecture, Yukon and Yukon XL are distinctive products that appeal to different customers," said DiSalle. "Versatility and spaciousness are valued by customers for both vehicles, but the Yukon XL is the choice for families with more children and those with lifestyles that require its unique combination of passenger- and cargo-hauling capabilities. In fact, Yukon XL owners are more than twice as likely to transport passengers daily in the third-row seat."

When it comes to safety, the Yukon lineup incorporates new technologies to help protect the driver and passengers before, during and after a collision. They include a forward radar system and the segment's only front seat center-mounted air bag (models with bucket seats), which is engineered to provide additional protection to drivers and front passengers in far-side impact crashes, where the affected occupant is on the opposite, non-struck side of the vehicle.

Bold styling, enhanced refinement
All-new exterior and interior designs advance GMC's professional grade aesthetic with elements designed to be beautiful and functional. The exteriors are sleeker and more aerodynamic, enhancing efficiency on the highway and contributing to the new Yukon's quiet ride.

Additional exterior features include:
- New inlaid doors fit into the body side openings instead of over the top of the body, significantly reducing wind noise and contributing to improved aerodynamics
- Laminated windshield and front door glass to enhance quietness
- Lightweight aluminum hood and liftgate panels enhance efficiency through reduced overall mass
- A standard rear spoiler on the liftgate houses a relocated rear window wiper that is hidden when not in use
- New worm screw-style liftgate arms take up less interior space than the previous gooseneck arms
- Illuminated, power-retractable assist steps available on Denali
- New family of 18-, 20- and 22-inch wheels, including standard 20-inch wheels on Denali.

Inside, the all-new 2015 Yukon's precisely crafted interior features a quiet cabin, authentic materials and premium infotainment choices. Examples include soft-touch instrument panel, console and door panel materials with live stitching and purposeful use of ambient lighting in functional areas, including first- and second-row foot wells and the center console. All models have a standard Bose sound system, seats with dual-firmness foam and an ambient air vent designed to enhance comfort for front-seat passengers.

There are more storage options in the new Yukon lineup, including a compartmentalized center console that's large enough to store a laptop or iPad and has provisions for hanging file folders and other organizational features, especially for customers whose vehicle also serves as a rolling office.

Advanced engine technology
The all-new Yukon family is more powerful and efficient than before, thanks to the new EcoTec3 engine family, which debuted earlier this year in the all-new 2014 Sierra. A 5.3L V-8 is standard in Yukon and Yukon XL models and an exclusive 6.2L engine is standard in Denali models, which is expected to deliver the segment's best horsepower and torque – SAE-certified 420 horsepower (313 kW) and 460 lb-ft of torque (623 Nm).

The EcoTec3 engines feature state-of-the-art technologies, including direct injection, cylinder deactivation, continuously variable valve timing and an advanced combustion system, designed to make the most of power, torque and efficiency across a broad range of operating conditions. More precisely controlled combustion enables the new engines to run with a higher compression ratio, which delivers greater power and efficiency.

Both engines are matched with the Hydra-Matic 6L80 six-speed automatic transmission.

The new Yukon family will be built at GM's Arlington, Texas assembly plant, and scheduled to begin arriving at GMC dealerships in the first quarter of 2014.