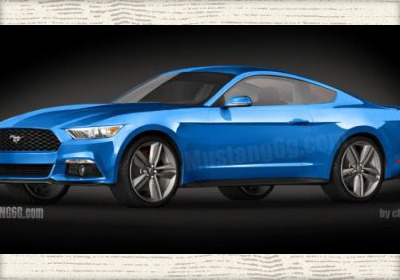 This is, according to the pony-car obsessed kids over at Mustang6G.com, the closest, most accurate rendering of the new, 2015 Ford Mustang to date. Artis Chazcron used a combination of Ford CAD images and information from assorted spy shots to assemble a fairly handsome car, albeit one that conforms to the tired cliché of being more evolutionary than revolutionary.

Now, it's very important to note that these are still speculative renders, and that they only represent the base car - that could explain the lack of the Mustang's vestigial side scoops, along with other, newer styling cues that Mustang6G seems to think will arrive on production models. Those items include a new, double-bubble roof, although the Mustang aficionados claim that even if it were present, it'd barely be visible from these angles.


The front end is pretty spot on, compared to what we've seen from earlier spy shots, while the tail, with its interesting light design is something new. The louvered taillights look quite different from the current version, obviously, though Mustang has gone the whimsical route with taillights before. Also, note the new rear diffuser uses an integrated reverse light and rear foglight, the latter of which is required for sale in Europe.

According to reports, this is merely the first trickle of a coming deluge of Mustang information. Sources are claiming that the Mustang will actually be shown near the end of December (merry Christmas indeed!), while official teaser images will start popping up any day now. We'll have much more on the new Mustang ahead of its predicted debut at the 2014 North American International Auto Show.