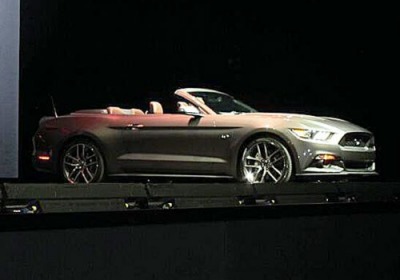 It hasn't yet been 12 hours since the hotly anticipated 2015 Ford Mustang has been let out into public view. After a series of evocative leaks over the course of the last days, we brought you a full deep dive of the sixth-generation pony car at the dawning of today. And yet, here we are rushing to bring you news of a new Mustang variant, already.

Be it part of a plan to keep the Mustang fervor at full boil, or a misunderstood email somewhere in the chain of command, Ford UK has unceremoniously tweeted a picture of the 2015 Ford Mustang Convertible. For a newly global Mustang, getting our first look at the droptop from the convertible-crazy British does make some amount of sense.

As for details, well, you're looking at them. Brandon Turkus reported yesterday that the Mustang 'vert would make use of a fully electric convertible mechanism, and that it would be of fabric construction rather than some kind of retractable hardtop. We see here that the fabric part is clearly true, and it does look as though Ford may still be employing the same kind of manually attached tonneau cover that exists right now. Of course, our view from this angle isn't great, and the particulars are still up in the air.

Overall though, the shape seems very crisp and tailored compared with the profile of the current Mustang Convertible. Here too we find the lowered, ground-hugging stance of the machine to be somewhat enhanced by the roofless look.


Expect to see details and a lot more images pop up in the near future. Until then, weigh in with your opinions of the 2015 Ford Mustang Convertible, in Comments below.

UPDATE: Video of the 2015 Mustang Convertible's reveal in Australia added below.