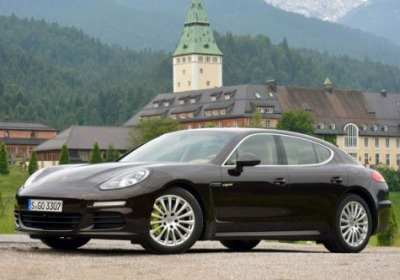 By the end of this year, Porsche will be producing as many plug-in vehicles (two) as mainstream automakers such as Toyota, Chevrolet and Honda. Before the 2015 918 Spyder hybrid supercar goes on sale in the US, though, it will be warming its customers up to the idea of a plug-in model with the 2014 Panamera S E-Hybrid. A step up from the previous Panamera S Hybrid, the new plug-in Panamera adds a more powerful and advanced electric drive system that pledges to deliver the performance expected of a Porsche with the added benefit of improved fuel economy and reduced emissions.

Going on sale in November, the Panamera S E-Hybrid is aimed at customers also considering the upcoming plug-in version Mercedes-Benz S-Class, but the car's dimensions and performance could make it a competitor for Tesla Model S customers. We headed to Germany at Porsche's invitation to see how well it performs, as well as check out the full range of newly refreshed Panamera models, which now numbers nine offerings – although we're still waiting for a production version of the gorgeous Sport Turismo wagon concept.

There is no irony lost in the fact that automakers are starting to use hybrid powertrains to boost performance, and Porsche is leading the charge with this new plug-in hybrid system. Starting with the same 3.0-liter supercharged V6 as the previous Panamera S Hybrid, the key to the new S E-Hybrid is its 9.4-kWh lithium-ion battery – versus the old car's 1.7-kWh nickel metal hydride battery – that allows the five-door hatchback to travel farther and at higher speeds under all-electric power.

Officially, Porsche says the S E-Hybrid can go "more than 20 miles" on electricity alone, and we were able to travel 24 miles (under moderate acceleration and with the air conditioning on) before the engine came on. The battery pack's optimal operating conditions have it charge to 95 percent of its full capacity, and then the engine comes to life when the charge drops to 15 percent. The S E-Hybrid's top speed for all-electric driving is quite impressive at 83 miles per hour (overall top speed is 167 mph), but driving at such high speeds will obviously shorten the car's all-electric range substantially.

For fans of classic Porsches used to the clattering of flat six-cylinder engines, the near-silent whir of the S E-Hybrid taking off could seem blasphemous, but Porsche has made sure this car doesn't sacrifice performance in its drive to be greener. The Audi-sourced engine alone is good for 333 horsepower and 325 pound-feet of torque, and paired to the battery and electric motors the S E-Hybrid produces a combined 416 hp and 435 lb-ft. Weighing about 250 pounds more than the old S Hybrid, the 2014 S E-Hybrid is the heaviest of the updated Panamera lineup at a staggering 4,619 pounds, yet it still delivers impressive acceleration with the ability to go from 0-60 mph in just 5.2 seconds.

The battery can be fully recharged from a 240-volt power source in just 2.5 hours (no time was given for charges from a 120-volt wall outlet, but we'd guess something in the 8-10 hour range is likely). Like a Chevy Volt, the battery can also be recharged using the engine as a generator in E-Charge mode, one of the car's three driver-selectable driving modes.

In regular driving, the Panamera S E-Hybrid operates in E-Power mode, which does its best to keep the car under full electric power. On the 32-mile 'range and fuel economy challenge' portion of our driving route, we drove 24 miles on electricity only and averaged about 1.4 liters of fuel consumed per 100 km (about 168 mpg) in E-Power mode. There are still no fuel economy estimates for the US, but expect them to be significantly higher than the prior Panamera S Hybrid. Adding a plug also moves the S E-Hybrid into an entirely different category as far as fuel economy ratings go, one that gets an extra MPGe combined rating to account for the added power that's received from the plug.


The most impressive equipment on the S E-Hybrid are its brakes.

Since Porsche wanted our test car returned with a full battery, the second part of our route was driven in E-Charge mode, which was able to fully restore the battery's charge after about 30 miles. During this stint, we were much heavier on the throttle as we enjoyed some of the region's fine mountain roads. The S E-Hybrid was still able to return 8 liters/100 km, which converts to 29.4 mpg. Considering how hard we were pushing the heavy car and the fact that the system was in E-Charge mode, this number is probably even more surprising than the economy we observed during the first part of the drive. In E-Charge mode, some of the gas-burning engine's output is used to recharge the battery, but it will stop charging the battery if the driver accelerates hard enough. The third mode the driver can select is Sport mode, which we did not have adequate time to experiment with but tightens up the throttle response for quicker acceleration.


On the road, it's almost impossible to notice any difference between the S E-Hybrid and the standard gas-powered Panamera S model when in hybrid mode, and even when operating under full electric power in E-Power mode, this big boy can still scoot off the line. We spent a couple of days driving a few different Panamera models through the Bavarian Alps – the same region where the Panamera was initially launched back in 2009 – and the plug-in hybrid model handled the tight mountain roads without a problem. Porsche has accomplished this feat by giving the S E-Hybrid its Power Steering Plus and eight-speed Tiptronic S automatic transmission (all other Panameras get standard variable ratio power steering and a 7-Speed PDK transmission). The most impressive equipment, however, in terms of driving, are the S E-Hybrid's brakes. At this point, we'd almost gotten used to the soft, squishy regenerative brakes used on many hybrids, but the Panamera S E-Hybrid stopped about as smoothly and confidently as we'd expect from anything wearing a Porsche badge.


The most obvious tell that you're looking at the greenest of Panameras is the abundance of Acid Green body accents.

After four years on the market, all Panamera models are receiving welcome styling updates for the 2014 model year. We're talking the basic midcycle refresh recipe used almost industry wide: new fascias, colors, headlights and taillights – nothing groundbreaking, but enough to show a difference. One way the S E-Hybrid differentiates itself from other Panameras is that it has charger port is on the left side of the car where gas models have a fuel filler door. (The fuel filler on the Hybrid is on the right fender.) Having the charge port on the left makes routing the wires to the battery pack easier and thus shaves unnecessary weight. Still, we think placing it at the rear was a missed opportunity to have it mounted to the front fender; not only as a convenience for real-world charging, but also as a throwback of sorts to the front-fender-mounted fuel filler of the 911. Of course, the most obvious tell that you're looking at the greenest of Panameras is our tester's abundance of Acid Green body accents, similar to those used on the 918 Spyder and its matching, limited-edition 911 model. There are definitely some color combinations that these green accents work best with (especially white), but our tester's Mahogany Metallic was not one of them.

Aside from a few new buttons and digital screens, one way to tell the difference between the Panamera S E-Hybrid and other 2014 Panamera models is the gauge cluster, which also gets some Acid Green treatment on the dials. Another change is that the analog speedometer has been replaced with a power meter for the electric motors that lets drivers know how efficiently (or aggressively) they are traveling. There are also new screens added to the multi-function display (to the right of the centralized tachometer) and the central navigation screen to show important information such as battery charge and hybrid modes. Not exclusive to the S E-Hybrid is the Porsche Car Connect smartphone app. This app is standard on the S E-Hybrid and optional on other models, and allows owners to communicate and interact with their car remotely, doing such things as locking the doors, sounding the horn, folding the mirrors and even locating the vehicle. Features specific to the E-Hybrid model include monitoring the car's charge status and remaining charge time as well as displaying driving ranges in both all-electric and hybrid modes.

Some hybrids give up rear-seat comfort or cargo space to accommodate a big battery pack and electronics, but the Panamera's hatchback design and luxurious nature mean that rear occupants have lost nothing in terms of comfort. Instead, the side compartments of the cargo area have been sacrificed due to the additional plug-in hybrid system – a total of four cubic feet has been lost. That drops the available cargo capacity to 11.8 cu-ft with the seats in place and 40.7 cu-ft with both seats folded forward. The portable charger bag takes up another chunk of trunk space but is removable if not needed.

Looking around the luxury hybrid landscape, the Panamera S E-Hybrid's $99,000 starting price isn't entirely out of line. Nor is this car's $106,875 as-tested price, which we felt was surprisingly low considering how much most Porsche options push up the bottom line. The S E-Hybrid commands about a $20,000 premium over the entry-level Panamera and about $6,000 more than a base Panamera S, but Porsche is banking on premium customers being more likely to pay a premium price for a plug-in vehicle. Take the altogether more modest Ford Fusion, for instance. Going from a base sedan ($21,900) to the plug-in Fusion Energi ($38,700) practically doubles the starting price of the car, while the Panamera S E-Hybrid only requires about a 27 percent premium over a base Panamera ($78,100) – and that includes plenty of added performance, too.


The company is showing that it can bring performance to new crowds of buyers.

While the idea of seeing a Porsche parked at an EV charging station might take some getting used to, the rest of this Panamera is exactly what we've come to expect from Stuttgart. The added weight of the new electrical components is offset by the enjoyment of instant torque and silent take-offs, and fortunately, the advantages of the S E-Hybrid don't require the car to be driven gingerly. (In our minds, there's just something inherently wrong with the idea of hypermiling something wearing a crest from Stuttgart.)

Porsche is definitely going to be busy this fall, launching this new plug-in Panamera and introducing the Macan small crossover around the time of the LA Auto Show. But the company is showing that it can bring performance to new crowds of buyers, even if that includes those looking to help save the planet. And after all this, if you're still not sure a plug-in hybrid can be sporty, just wait until September 18 (9/18, natch) when Porsche plans to unleash the official production version of the 918 Spyder.