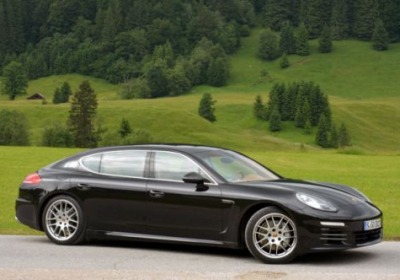 If the idea of a Porsche sedan (or, long hatchback) is still off-putting to you, then you might want to look away now. For 2014, the polarizing Panamera has received a midcycle refresh bringing slightly different styling, as well as adding two new models to the lineup, the S E-Hybrid and the stretched-wheelbase Executive. Having focused most of my recent trip to Germany on a First Drive of the intriguing plug-in Panamera, I also got to spend some time with the roomier Executive model.

Offered in both 4S and Turbo guise, the Panamera Executive has been stretched by almost six inches for the sole purpose of improving rear passenger space. Although it's hard to imagine anyone would willingly buy a Porsche and opt to sit in the back seat, I'd have to say that if I'm going to be chauffeured around in a car, why not make it a Porsche? For the most part, though, I'm guessing that many Panamera Executive sedans will be owned by people who want to one-up their buddy driving a stretched BMW 7 Series or Mercedes-Benz S-Class.