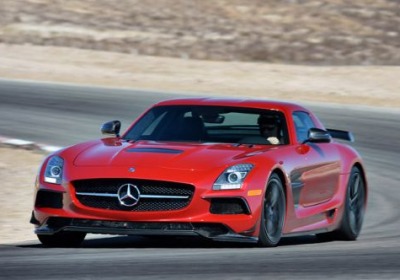 The biggest misconception about the Mercedes-Benz SLS AMG Black Series is that it's simply a higher-performing version of the SLS GT - a closer look, or better yet, a few hot laps on a high-speed racing circuit, reveals that is anything but the case.

Launched in the States in mid-2011, the standard SLS GT is a 583-horsepower, all-aluminum, gull-wing coupe with performance that positions it near the top of the exotic segment. While the AMG team at Mercedes-Benz could have left it alone, their experience with the SLS AMG GT3 race car said there was room for improvement, so they devised the SLS Black Series. The transformation from SLS GT to SLS Black Series is extensive, with no fewer than 17 different significant enhancements.

The engine mapping, crankshaft, connecting rods, valve-train, intake, exhaust and cooling are all modified and the engine's redline bumps up from 7,200 to 8,000 rpm, which pushes output of the hand-built 6.3-liter V8 to 622 horsepower. The power steering receives a new ratio, a coil-over AMG Adaptive Performance suspension is installed along with underbody braces, the track is widened, two-piece carbon-ceramic brakes replace iron rotors at each corner and a lightweight titanium exhaust is fitted beneath. The AMG Speedshift seven-speed dual-clutch gearbox is modified and an electronically controlled AMG rear differential lock ensures the power goes to the pavement. Last on the mechanical upgrades are new lightweight forged wheels (10x19 inches front and 12x20 inches rear) wrapped in special R-compound Michelin Pilot Sport Cup tires.

More visible are the cosmetic upgrades, which basically include new AMG aerodynamic bodywork forward of the A-pillar, carbon-fiber exterior mirrors, a fixed rear wing and other lightweight components. The interior of the cabin is also treated to unique Black Series Designo leather with Alcantara inserts. The short options list includes wheels with matte black paint, Bang & Olufsen BeoSound audio, COMAND multi-media interface and a fitted car cover, to keep the dust at bay while at the track.


The SLS AMG Black Series weighs 3,417 pounds, which is 154 pounds lighter than its GT sibling, but its race car performance carries a $73,500 premium - in terms of engineering and tuning, many would consider it a bargain. To legally explore its performance, I spent the day with the automaker's flagship car at Willow Springs International Raceway in the Southern California Desert.