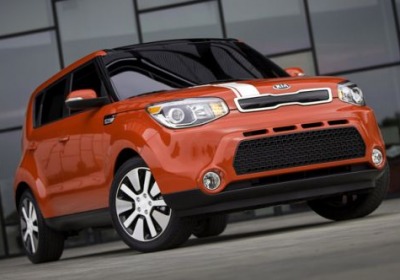 Kia has announced pricing on the refreshed 2014 Soul. At $14,700 (*plus a destination charge of $795), the new funky crossover undercuts its two primary competitors, the Scion xB and Nissan Cube, by $2,850 and $2,060, respectively. That base model includes 16-inch alloys, cruise control, wheel-mounted audio controls and a 1.6-liter, four-cylinder engine with 130 horsepower and 118 pound-feet of torque.

The mid-range model, the Soul Plus, demands $18,200 and adds a spate of exterior items, like 17-inch wheels and chrome trim, to class up the Soul's look, not to mention a 164-horsepower, 2.0-liter, four-cylinder engine. Plus customers also have access to a number of option packages, including a $400 pack that adds Kia's UVO infotainment system and a backup camera. A $1,400 Audio Package adds navigation, an eight-inch display, an Infinity stereo and automatic temperature controls. A $3,000 Primo Package adds a few notable luxury items, like a panoramic sunroof, heated leather seats, and push-button start. Finally, a $400 Eco Package adds stop-start technology and replaces the 17-inch wheels with 16s shod in low-rolling-resistance tires.

The top-of-the-line Soul Exclaim starts at $20,300 and comes with LED running lights, LED taillights, 18-inch wheels and the Plus's UVO Package as standard. Buyers can opt for The Whole Shebang, a $2,500 option pack that apes the Primo Package from the Plus. Weirdly, the Audio Package from the Soul Plus is an extra $1,200 on the Exclaim, and has been rebranded the Sun and Sand Package. Feel free to peruse the press release below for more.

Kia's Iconic Soul Starts at a Low MSRP of $14,700
The all-new Kia Soul now comes with more premium features and improved driving dynamics
The fun and funky form stays true to the roots of its iconic design

IRVINE, Calif., August 28, 2013 – Kia Motors America (KMA) is pleased to announce pricing for its iconic urban passenger vehicle, the all-new 2014 Soul. When it goes on sale during the fourth quarter, the Soul will be offered in three unique trim levels: Base, Plus and Exclaim, with the Base trim starting $14,700 MSRP, not including destination charges of $795. Since going on sale in 2009, the Soul has become one of KMA's top-selling models and the all-new Soul is poised to continue its sales success by offering tremendous value and convenience while providing more premium features and content and improved driving dynamics. The new design sits on a stiffer, longer and wider chassis allowing for more passenger and cargo room while reducing NVH levels.


"With a starting price below $15,000, the outstanding value customers have come to expect with the Soul remains firmly intact," said Michael Sprague, executive vice president of marketing and communications at KMA. "What will come as a pleasant surprise is the level of refinement and sophistication the 2014 Soul brings to the segment at such an appealing price point."

Kia: One of the World's Fastest Moving Global Automotive Brands
Kia Motors America is one of only three auto brands to increase U.S. sales in each of the past four years, and in 2012 the company surpassed the 500,000 unit mark for the first time. With a full line of fun-to-drive cars and CUVs, Kia is advancing value to new levels of sophistication by combining European-influenced styling – under the guidance of chief design officer Peter Schreyer – with cutting-edge technologies, premium amenities, affordable pricing and the lowest cost of ownership in the industry. Kia recently joined the exclusive ranks of Interbrand's "Top 100 Best Global Brands," and is poised to continue its momentum with seven all-new or significantly redesigned vehicles scheduled to arrive in showrooms in 2013. Over the past decade Kia Motors has invested more than $1.4 billion in the U.S., including the company's first U.S. assembly plant in West Point, Georgia – Kia Motors Manufacturing Georgia – which is responsible for the creation of more than 11,000 plant and supplier jobs. The success of the U.S.-built* Optima and Sorento in two of the industry's largest segments has fueled Kia's rapid growth and is complemented by Kia's comprehensive lineup which includes the Cadenza flagship sedan, Soul urban passenger vehicle, Sportage compact CUV, Optima Hybrid, the Forte sedan, Forte5 and Forte Koup compacts, Rio and Rio 5-door sub-compacts and the Sedona minivan.