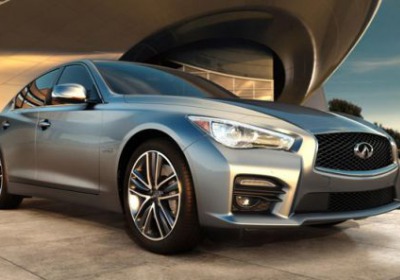 Infiniti's answer to the hot new sports sedans from BMW, Cadillac and Lexus is creeping closer and closer to its August 5 arrival in dealerships. And while we yet can't pass judgment on the Infiniti Q50 – formerly known as G37 – 3,650 Americans are apparently ready to, as they've already raised their hands for the 2014 model.

In a pre-sale program announced at the 2013 New York International Auto Show, Infiniti gave buyers until June 30 to raise their hand for the new model. "The Infiniti Q50 pre-sale exceeded all expectations, becoming the most successful such program in Infiniti history," according to Infiniti's American Vice President Ben Poore.

A lot is expected of the Q50, available in both rear- and all-wheel-drive and with an optional hybrid powertrain. With 328 horsepower from its 3.7-liter V6 engine, Infiniti is making sure the new car packs a big punch relative to the competition. Meanwhile, the Q50 Hybrid offers fuel-sippers 360 ponies and up to 36 miles per gallon.

If the V6 and hybrid aren't your cup of tea, the Q50's launch will reportedly be followed by the arrival of a turbocharged four-cylinder and a diesel engine. Meanwhile, the sleek four-door is expected to be joined by Q60 variants which will replace the G37 Coupe and Convertible.

The dramatic new Q50 features distinctive design, engaging performance, world's first technologies and unmatched levels of connectivity and personalization. It is offered with a choice of 328-horsepower 3.7-liter V6 or 360 net horsepower 3.5-liter Hybrid models. Starting prices* have been announced at $36,700 USD for the Q50 3.7-liter model and $43,950 USD for the Q50 Hybrid Premium model.

A special Q50 pre-sale program, announced at the New York International Auto Show in March, closed June 30 with 3,650 orders. Participants have until Oct. 31 to complete their purchases.

Both Q50 3.7-liter and Q50 3.5-liter Hybrid models are available with a choice of rear-wheel drive or Intelligent All-Wheel Drive and in a range of well-equipped models, including versions with special sport appearance and performance features with sport brakes and sport suspension tuning. The Q50 Hybrid features one of the fastest accelerating hybrid engines and, at 36-mpg highway, one of the most fuel-efficient powertrains in the segment.