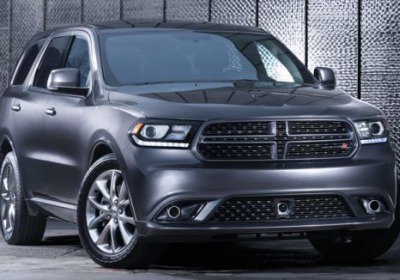 Even though Chrysler will reportedly discontinue the Dodge Durango after the current model's lifespan – said to be around 2016 – that isn't stopping the automaker from improving its full-size, three-row SUV. The vehicle won't debut at the New York Auto Show until tomorrow, but images are already leaking out ahead of the embargo lift, and they show that the 2014 model is getting even more aggressive styling to go with more technology inside and out.

Dodge limited its early press shots of the new Durango to just the R/T trim level, but this new look adds a meaner look to this model with more dramatic projector-beam headlights along with a "floating" crosshair grille and a restyled fascia. At the rear of the Durango, LED racetrack taillights show a family resemblance to the Charger and Dart, while a new rear fascia adds to the styling while also allowing for an integrated trailer hitch.


On the tech side, the instrument panel looks to have been redesigned to include a standard seven-inch thin-film transistor (TFT) gauge cluster, and it also appears as if Chrysler's well-liked UConnect system has been updated with the 8.4-inch touchscreen found in other Chrysler vehicles. The 2013 model's conventional console shifter has been replaced by a rotary knob for gear selection, suggesting that there are transmission changes afoot as well. We'll have more details when the silks slide off this big boy tomorrow, so stay tuned.