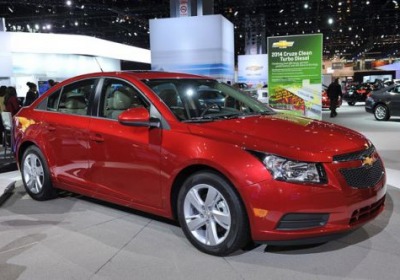 Ever since General Motors confirmed plans to produce a diesel-powered Cruze back in 2011, we've been eagerly awaiting its arrival. And as part of the 2013 Chicago Auto Show, Chevrolet has pulled back the cover on its oil-burning compact sedan, set to go on sale in the near future with a starting price of $25,695, not including $810 for destination.

The heart and soul of the Cruze TD (that's its official name) is a 2.0-liter turbo-diesel inline four-cylinder engine rated at 148 horsepower and 258 pound-feet of torque, mated solely to a six-speed automatic transmission. The engine also has an overboost function that will increase torque to 280 lb-ft for up to ten seconds. The full brace of official specs haven't been released, but GM tells us that highway fuel economy will come in at 42 miles per gallon. If that number sounds familiar, it's because the Volkswagen Jetta TDI has the exact same rating. Unlike the Jetta, however, the Cruze TD can run on B20 biodiesel, where as the Volkswagen can only accept B5.

Model-specific changes to this 2014 Cruze TD include an aero kit and unique 17-inch alloy wheels. Inside, there's a full leather interior, and Chevrolet will provide two years of complimentary scheduled maintenance, not to mention a 100,000-mile powertrain warranty.

Everything you need to know about the Cruze TD is in the press release below, and have a look through our gallery of live photos to see the torquey little Chevy for yourself.