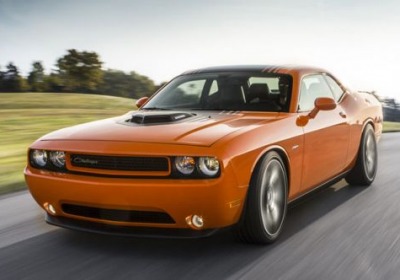 Enamored of the Dodge Challenger but wish you could get one with a shaker hood? We've got good news, because Dodge and Mopar have teamed up to bring it back.

The 2014 Dodge Challenger R/T Shaker packs the same 5.7-liter Hemi V8 as the standard Challenger R/T, but upgrades the business end with a through-the-hood exposed cold-air intake system. The retro hood scoop protrudes from the center of the hood in satin black (matching the decklid spoiler) to feed the Hemi and shakes with the engine just like the original from 1970. The Shaker model also comes with a Super Track Pak that adds a new steering rack, brake linings, shocks and 20-inch Goodyear Eagle F1 Super Car rubber. You can also shut off the stability management system completely in this car. A series of interior and exterior trim enhancements round out the look. The whole package adds $2,500 to the price of a Challenger R/T Classic for an all-in MSRP of $36,995.

In case that's not enough, Dodge is also offering a limited-edition Mopar Challenger that follows the 2010 Mopar Challenger, 2011 Mopar Charger, 2012 Mopar 300 and 2013 Mopar Dart. Limited to just 100 examples, the 2014 Mopar Challenger gets the same Shaker hood intake, unique graphics and wheels, an enhanced interior and a long list of optional extras from the Mopar parts catalog. Dodge isn't saying just yet how much the Mopar Challenger will cost, but you can bet it will command a considerable premium for the exclusivity alone.


Dodge and Mopar are presenting both of these special Challengers at the SEMA Show in Las Vegas this week, but if you're not in Vegas, you can read more about them in the press release below and scope them out in our pair of high-res image galleries.

- With its functional -Shaker