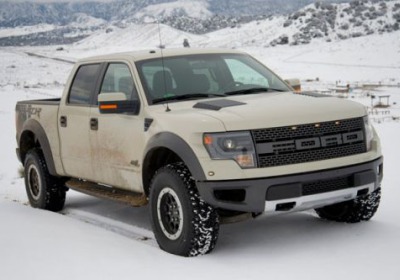 I'm not normally a pickup kind of guy, but the 2013 Ford F-150 SVT Raptor won me over nearly instantly. The street-legal trophy truck – there is really no other way to accurately describe it – is big, brawny and incredibly capable. Let's just say it's every bit the monster it visually portrays. I spent a week pretending I was one of Ford's Baja 1000 drivers, but lacking desert sand, I headed into the local mountains where a mild winter storm had dropped a couple inches of fresh snow on my favorite off-road park. The Ford was, for the most part, practically unstoppable.

Ford offers its SVT Raptor package on Supercab and Supercrew platforms with the five-foot, five-inch bed. The Supercrew I tested rides on a 144-inch wheelbase (about a foot longer than the Supercab). In addition to its cosmetic differences when compared to the standard F-150 – there isn't a young boy on the planet who doesn't think the matte black Ford grille is cool – the Raptor has a 73.6-inch track – nearly seven inches wider than the track on the standard F-150.

After upgrading the F-150 SVT Raptor significantly for the 2012 model year, there are only a few changes for 2013. The list includes standard high-intensity discharge (HID) headlamps, Hill Descent Control, forged beadlock-capable wheels, and the new matte Terrain color (aka "Desert Storm") option seen on my test model.