2012 Brazilian Grand Prix: The circle is complete, and what a circle it's been [spoilers] 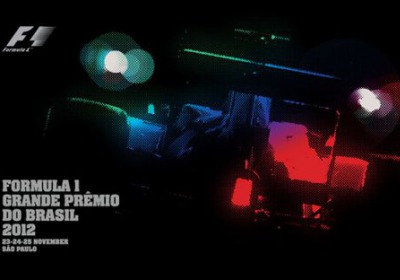 The track between the lakes, the Circuit d'Interlagos in Sao Paulo, Brazil, yet again served up a fitting finale to the Formula One season. There were all kinds of ways for the two Driver's Championship contenders – Sebastian Vettel in the Red Bull and Fernando Alonso in the Ferrari – to win and lose during the 71 laps of the Brazilian Grand Prix, and that was before the rain, before the yellow flags and safety car periods, and before the accidents.

The World Championship lead swapped hands at least three times during the race. By the end of Lap One, in fact, it was a fair question if either driver would have hands, or a car, steady enough to hold it...

Lewis Hamilton, saying goodbye after this race to a six-year career with McLaren, took pole position from his teammate Jenson Button and Red Bull's Mark Webber, and unlike the last few races it was close between the front three. Vettel was three-tenths back in fourth, followed by Felipe Massa in the Ferrari – again outqualifying his teammate Fernando Alonso, Pastor Maldonado in the Williams, Nico Hülkenberg in his last race for Force India before moving to Sauber next year, then Alonso in eighth, then the Lotus of Kimi Räikkönen and finally the Mercedes-AMG Petronas of Nico Rosberg.

Maldonado was demoted ten places for missing a weigh-in after qualifying, moving Alonso up to seventh. This race Ferrari did not play games with gearboxes, opting to leave Massa in his place in line.

About the only thing regular at the start of the race was the drizzle – but no one knew how wet it would get and the forecast kept changing from updates like "ends in five minutes" to "will continue for 30 minutes." Schumacher, once the rain maestro, started with his car set up for a wet race.

When the lights went out, it all happened in the first three miles of the race. Everyone got away clean except Vettel, who went from fourth to seventh by Turn One. Then, going through Turn Four he speared from the outside of the track down to the apex, not seeing that Bruno Senna was already down inside of him. Vettel slammed into Senna, spun and his RB8 took a bunch of damage to the left rear, carbon fiber bits flying all over the place. Vettel got himself pointed the right way but there was no way they could fix the car – it was now a test to see if it could make it to the end of the race and if he could get it into the points.

Alonso got past Hülkenberg on the lap, and at the end of Lap One Alonso passed both Massa and Webber down the front straight to take third place behind Button. With Vettel at the very end of the pack, Alonso was, on track, World Champion.

Alonso went off the track at the end of the front straight on Lap 5, which compelled teams to switch to rain strategies. Räikkönen was the first to pit for intermediate tires on Lap 6, one lap before Romain Grosjean spun out of the race – again – in his Lotus, two laps before Vettel was officially in eighth, having been 24th just seven laps earlier. Over the next five laps all of the leaders pitted to change to intermediates except for Button and Hülkenberg, who not only stayed out on slicks in the wet, but were doing better times than the drivers who didn't. By Lap 16 it the order was Button, Hülkenberg, Hamilton, Alonso, Vettel, Kobayashi, Webber.


Five laps later, Hülkenberg had got by Button and was leading a Formula One race for the first time in his career, the two of them were putting distance on the rest of the pack, and all the leaders were again pitting for dry tires.

The numerous incidents in the first third of the race left all kinds of debris on the track so the Safety Car emerged on Lap 23 to guide the pack for seven laps. There were a few scraps when the SC darted back to its lair, Kobayashi passing Vettel in what was called "a Leroy Jenkins moment," then Massa passing Vettel and Kobayashi, and getting by Alonso who had pitted again.

After a few laps of calm, Hamilton passed Hülkenberg on Lap 48. Five laps later Hamilton's McLaren career was over in the worst way, Hülkenberg trying to dive inside under braking, losing the back end and clobbering the McLaren, Hamilton limping his car off the track with a broken front suspension. Hülkenberg was given a drive-through penalty which dropped him to fifth. Hamilton received a standing ovation from his team when he got back to the McLaren garage.

This put Button in the lead, followed by Massa and then Alonso. Vettel was in seventh and, on track, still leading the World Championship. The McLaren was well too much for the Ferraris behind, so when Vettel passed Schumacher to take sixth place on Lap 64, as long as his car made it to the end he was going to get a whole lot more carry-on baggage for his trip home. The rain played its last trick on the penultimate lap, when Paul di Resta in the Force India crashed into the outside of the final turn – that brought the Safety Car out again to lead the field home to the end of the season.

It ended as it began: Button won the first race this year in Australia and now wins the last, and this makes the fourth year in a row that P2 on the grid has won the Brazilian Grand Prix. He was followed by Alonso, Massa, Webber, Hülkenberg, Vettel, the retiring Michael Schumacher, Jean-Eric Vergne in the Toro Rosso, the departing Kamui Kobayashi in the Sauber, and the most consistent driver of the entire year, Kimi Räikkönen, took the last points-scoring position in tenth.

Full credit to Alonso for keeping his Ferrari, an inferior car almost the entire year, in the hunt down to the last half of the last grand prix of the season. But Red Bull didn't merely turn their season around by making their car competitive, they reengineered a dominant car and claimed win after win, Sebastian Vettel stamping his initials into enough checkered flags for himself and his team to lay claim to another lode of double-championship-winning silverware for the third year in a row.

As a SKY F1 commentator said of the race but we think applies to the entire year, as far as F1 goes 2012 might have been "the best thriller since Michael Jackson went into a recording studio." Bring on 2013. We'll see you then.