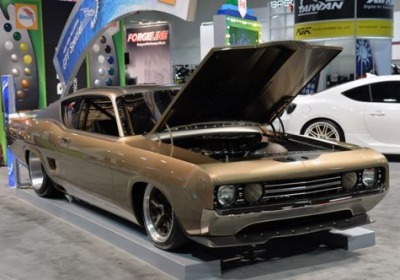 Rad Rides by Troy has unleashed upon the SEMA crowds this custom 1969 Ford Torino Talladega GT Special, and it's a beauty. The car calls to mind the classic Holman Moody stock cars that circled NASCAR tracks in the late 1960's, driven by the likes of Mario Andretti, Dan Gurney and David Pearson, who won the Grand National title in both 1968 and '69 in a Ford Torino.

Even though it has plenty of stock-car influence, there's nothing retro about the car's design or powertrain, other than the fact that the engine is based on a Ford Boss 429 block. Fuel injection, aftermarket aluminum heads and a high-tech custom computer system combine to send 750 reliable ponies to the rear wheels through a Tremec five-speed manual transmission. Brakes measure 14-inches all around, with six-piston Wilwood calipers up front and four-piston units out back.

There's custom bodywork abound, painted in a two-tone Tennessee Whiskey Gold and Daytona Sand finish. Check out all the amazing details in the image gallery below, and scroll down to read all about it in designer Troy Trepanier's own words.

Rad Rides just finished a car that's been three years in the making. It's called the "GPT Special", and it is the baddest street machine to ever roll out of our shop. I'm talking about the 1969 Ford Torino Talladega that we just completed for George Poteet. For those of you who might not be aware, we built the '69 Barracuda "Blowfish" Bonneville Salt Flat race car for George about six years ago. Prior to the Blowfish, George had called on us to construct the 1957 Ford Ranch Wagon and the 1954 Plymouth "Sniper". Those two projects helped establish our business in the early years. George is not just a customer, he is a good friend who provides our shop the great opportunity to build high end cars.

The cars that George has us build are typically the product of some image that has been germinating in his mind for years. We haven't done a hardcore street machine lately, so I was excited when George called on us to do a '69 Torino Talladega that could be driven on the street. George was looking for Blowfish race car features with a strong NASCAR theme consistent with the Holman Moody Ford stock cars of the late 60's. As much as he liked the '69 Talladega, he longed to tweak the Torino's proportions for better aesthetic balance. The best thing about the Torino is that very few street machines have been based on a Torino. Have you seen a "done" Torino recently? Probably not. But that absence of built Torinos gave us a great opportunity to build a unique car.

Doing a car that no one else has done is a banner philosophy at Rad Rides. A '69 Talladega became the perfect blank canvas for creating a car distinct from the typical street machine. I didn't want to just copy an old NASCAR car. I liked the thought of building a car that recalled the NASCAR glory days of the 60's and early 70's, but then enhance it with modern day features and body modifications. George was already thinking along the same lines, so we set out to transform a plain-Jane '69 Torino GT into our interpretation of what Holman Moody might have created today.

Starting from the beginning, George located the rust free '69 Torino. After cutting out the entire floor, we called on our good buddy Art Morrison for a chassis built with 2x3 inch rails front and rear, and 4x4 inch perimeter rails. Wheelbase was built an inch shorter than stock. Art Morrison C5 Corvette front suspension with rack and pinion steering means that this car will hold its own among other modern street machines.


Stopping power comes from Rad Rides by Wilwood 6 piston front calipers and 4 piston rear calipers. Wilwood rotors are 14 inches all around. The rear 4 link suspension is complemented by Rad Rides Watts Link and custom machined bracketry. A Tremec TKO 600 five speed manual by Bowler Transmissions, rowed by a period correct Hurst shifter and Holman Moody wood shift knob, spins the Mark Williams "Ultimate 9" rear differential equipped with 3.70 gears and Detroit Locker. Our buddies at Billet Specialties made the GT40-style wheels with a brushed lip and powder coating to create the look of a cast wheel. Fronts are 18x10 width while the rears are 20x12 with Michelin Pilot Super Sport tires all around. The rear tire is 14 inches wide, which creates a great stance from just about every angle.

George has driven his streamliner "Demon" to speeds over 400 mph about thirty times in the last three years. He is no stranger to high performance driving, so the GPT Special had to be a fun street car... something of a race car with license plates. The Morrison chassis required the right choice for an engine, one that would be docile enough for street driving, but be capable of delivering serious horsepower and torque numbers. Consistent with the NASCAR theme, a Boss 429 quickly became the motor of choice. We figure Holman Moody would be proud.

A Rad Rides engine compartment must have at least as much impact as the entire car. If the engine compartment disappoints even the most casual observer, then the car is not good enough. A dynamic motor presentation is an absolute necessity. The Boss 429 engine pumps out about 750 horsepower and has been enhanced with Kaase aluminun heads and Rad Rides Fuel Injection. The intake manifold is a super rare Ford experimental piece that George found at a swap meet a few years ago. Originally designed for Hilborn injection, the Ford intake was drastically modified at Rad Rides by Lawrence Laughlin to accept our own fuel injection system. The manifold was bored out, and new throttle shafts and plates were fitted. Injector bungs were installed to host the Precision Turbo 58 lb injectors. Lawrence also fabricated the butterflies, linkage, and fuel rails that mount up and out of sight. Our Rad Rides crew built both header flanges and headers. My buddy John Meaney provided his Big Stuff 3 engine management system for flawless performance, drivability, and reliability. Dale Cherry, tuner guru of Injection Connection, completed final tune for the Boss 429. The ARP stainless , rivets, Tri-Wing fasteners, and satin paint create a strong, industrial look under the hood.

Body modifications are extensive. Adam Banks and Levi Green did the bulk of the exterior fabrication work. The crowns of the quarters have been stretched an inch. These custom quarters are an inch wider than Ford's versions, incorporate functional brake cooling scoops, and rear wheel lips pushed 2 inches wider and 2 1/2 inches higher than stock. The rockers are extended, and feature exhaust cutouts with a little bit of a coke bottle bend to them. The front fenders are shortened 3 inches, and have a fabricated wheel lip to match the rear quarters. The front nose is fabricated, with Talladega-style sloped header panel and fenders. The hood features a unique power bulge and scoop arrangement. Our own fabricated chin spoilers are aggressive, but work well with the radical look of the beast.

Custom machining includes the entire grille, which was carved from a block of billet aluminum. Both bumpers are hand built, and feature high show shine and brushed Nickel finish completed by Sherms plating. Tail light bezels and lenses were machined in house, and look better than stock. The rear belly pan and upper intake pan were fabricated by Adam. The roof is stock, but in order to show some fraternal connection to the Blowfish, roof rails and bolted in windows were installed on the car. For all the ignored Torino's that have been overlooked, the GPT Special has the look.

During the three year construction of the GPT Special, it has been shown in bare metal at a number of events to display the craftsmanship of our team at Rad Rides. Response has been awesome. Special thanks to all of you who have already complimented us on the car. Hundreds of hours of fabrication, shaping, TIG welding, and tedious body fitment were poured into the GPT Special. The cage, chassis, and panels were powder coated Bronze Metalic by Coating Specialties. When the metal was perfect, the car was sent over to our paint guys, Adam Krause, Ryan Marion, Ian Walton, and Tyler Krause. After about a thousand man-hours of body prep and paint work, the car rolled back to our main shop wearing "Tennessee Whiskey Gold" gloss paint on the bottom half of the car, and "Daytona Sand" satin paint on the roof and in the interior. Those paint guys continue to amaze me with the quality of their work. I am really grateful to have them as part of the Rad Rides team.

I'm ecstatic about the GPT Special. Our goal has been to create a new standard for street machines that combine the highest level of craftsmanship, creativity, and innovation with raw horsepower, superior handling, and rock solid reliability. We believe we achieved those goals. The build is our best team effort to date. The Rad Rides team demonstrated incredible dedication to get the car completed for the America's Most Beautiful Roadster show in California. I look forward to many of you checking the car out in person. The car will be at both the AMBR in Pomona, and the Detroit Autorama March 8-10. Looking forward to a great year!