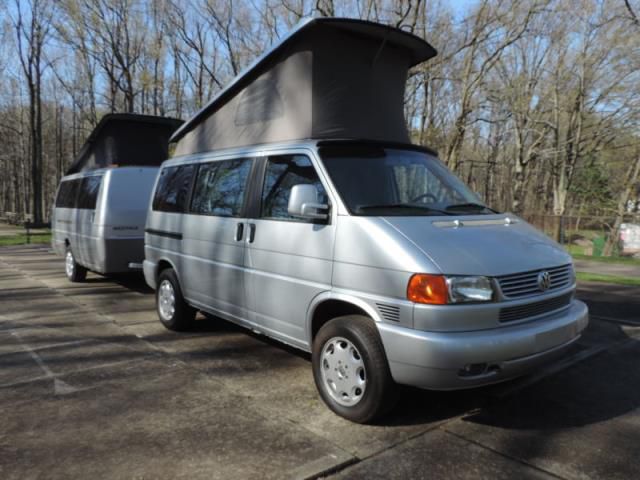 2003 Eurovan Weekender PopTop with a Matching 2016 Westfalia Full Camper PopTop Trailer. Only 86K miles on the Weekender. Trailer is virtually brand-new. Both vehicles have a Brand New 2 Lift Kit with matching Brand New 16 Alloy Wheels and Tires. Absolutely fully loaded with all possible features and amenities. Only 86K documented, original miles. Runs, Drives, and Looks Astonishing. Extremely Clean inside and out. Never smoked in. As a top-of-the line PopTop Weekender Package this Van it comes with a Fully Transformable Weekender Interior Package, that Sleeps 4 Comfortably, has a Foldout Table, Removable and/or Folding Extra Seats, along with the under the seat Refrigerator / Cool Box and a whole lot more. All Curtains and Accessories are present and intact. Being a California vehicle it has absolutely zero rust anywhere. Meticulously maintained and serviced vehicle. The van has just been completely, thoroughly, and lovingly serviced with all-new tune-up, fresh fluids, filters, and a whole lot more. Transmission has just been serviced and upgraded for towing duties. A Brand-New 2 Lift Kit has just been installed, along with a Brand-New 16" Alloy Wheel and Tire Package, as well as Brand-New Heavy-Duty Bilstein Shocks All-Around. Overall, an outstanding, last year made, specimen of a Eurovan. Free, Clean, and Clear Title in hand.
My e-mail is : enosrosalieq@netzero.com