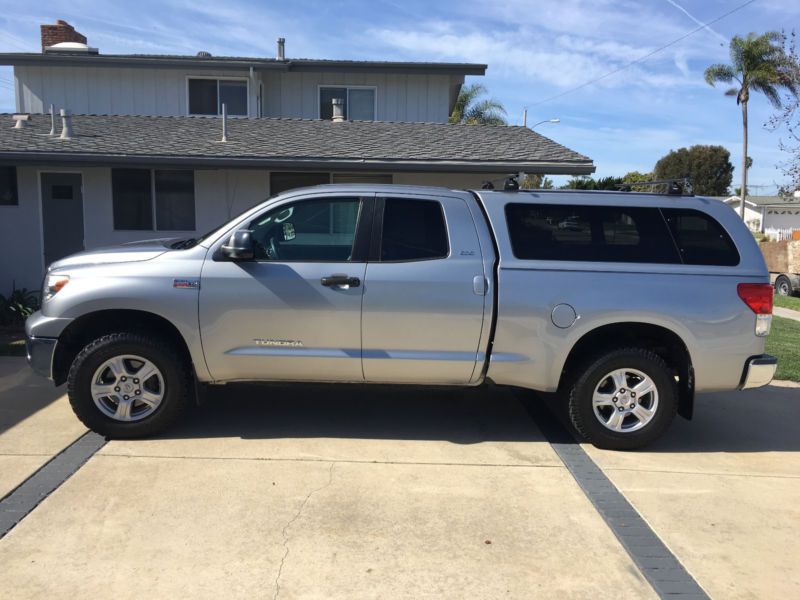 Please email me with any questions or requests for additional pics or something specific at: margaretmssuto@winetasters.net .

I am selling my Silver 2011 Toyota Tundra SR5 Double Cab. As you can see from the pictures, the truck has a top of
the line paint chip matched Snugtop Super Sport Shell, Thule roof racks, and to finish it off, a top of the line
bedrug bed liner as well. This set up was $3000 alone. The shell has a pass through window to accompany the trucks
power sliding rear window, so you can access the cab or shell from inside either way.
This truck is in excellent shape, it has very low miles (43,859 and counting), and is extremely well taken care of.
It comes with the infamous 5.7L V8, SR5 package, tow package, cold weather package (not that we need it in Southern
Cali.), power driver seat, power sliding rear window, bluetooth audio/phone connectivity with voice control, and
single CD with XM radio capabilities. The interior is perfect (non smoker), and the exterior is excellent.
I bought the truck new in 2011, so needless to say I am the only owner (non smoker). Nothing on the truck has been
modified except; I installed Bilstein 5100's all the way around, with the front Bilsteins being the 5100 adjustable
ride height version, so I was able to level the truck out from its original stance and create a MUCH cleaner look.
I also installed BF Goodrich All Terrains to finish off the look I was trying to achieve. The tires have about
15,000 miles on them, still plenty of life left.