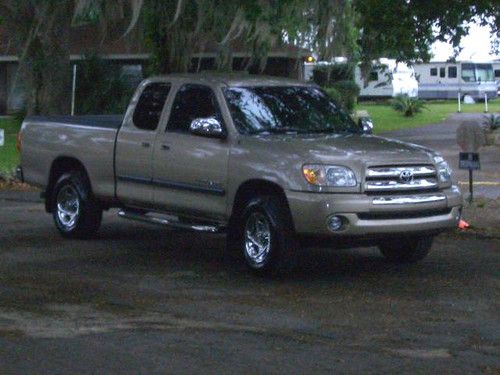 WELL I KNOW YOU HAVE HEARD ABOUT THE CAR FROM  "THE LITTLE OLE LADY FROM PASADENA", WELL HERE WE HAVE A "PICKUP TRUCK FROM THE LITTLE OLE MAN FROM ASTATULA" !!!!!!           FLORIDA THAT IS, MIDDLE PART, 30 MINUTES NORTH OF ORLANDO. COLOR IS SANDSTONE w/TAN INTERIOR. 4 DOORS w REAR SEAT INCL. ENTERTAINMENT & BEVERAGE TRAY.

2ND OWNER PICKUP THAT HAS BEEN EXTREMELY WELL TAKEN CAR OF.  ONLY AMSOIL SYTHETIC OIL USED, CHANGED FREQUENTLY, YOU WILL SEE FROM THE PICTURES, THAT YOU COULD EAT OFF THE ENGINE. DON'T LET THE 6 CYL FOOL YOU, IT IS A 4.0 LITRE WITH 245 HORSEPOWER THAT WILL PULL MOST ANYTHING YOU WANT. GREAT POWER & GAS MILEAGE OF 22-24 MPG ON THE HIGHWAY. SPEAKING OF HIGHWAY, SEEMS THAT EVERYONE SAYS HIGHWAY MILES THESE DAYS, BUT YOU WILL SEE FROM THE PICTURES & WHEN YOU DRIVE THIS ONE, THE TRUCK WAS OWNED BY A PROFESSIONAL THAT DROVE HIGHWAY MILES IN MIDDLE TO UPPER FLORIDA FOR HIS LIVING. THE 1ST OWNER PUT 21,000 MILES ON THE TRUCK IN THE 1ST 5 YEARS & THEN THIS OWNER HAS PUT THE REST OF THE MILES, ON THE TRUCK, IN THE LAST 2-3 YEARS. THE TRUCK IS NOT BRAND NEW, BUT MOST WILL BE REMARKABLY SURPRISED AT THE CONDITION & THE WAY IT HAS BEEN PAMPERED SINCE NEW. IT WOULD FILL UP THE REST OF THE PAGE TO LIST ALL THE OPTIONS, BUT SUFFICE IT TO SAY THAT IT HAS ALL THE IMPORTANT ONES & THEN SOME. THERE HAVE BEEN A FEW UPGRADES SINCE DELIVERY THAT WE WANTED TO MENTION & THOSE WOULD INCLUDE, *CHROME SIDE STEP UP RAILS, + TINTED WINDOWS + WINDOW RAIN GUARDS + HEAVY DUTY BED COVER THAT FOLDS BACK FOR TRADITIONAL HAULING, + RUBBERIZED BED MAT, & NICE CHROME STYLE WHEELS ALL AROUND.

THIS TRUCK NEEDS NOTHING, & IS READY TO GO. HAS CLASS 3 RECEIVER w/WIRING FOR TOWING, HEAVY DUTY BATTERY, HEATER,  & STARTER. I TELL YOU THE LIST GOES ON & ON, SO I AM TRYING TO JUST HIT MOST OF THE HIGH POINTS. IT IS A BOOKS & RECORDS TRUCK TO INCLUDE THE ORIGINAL WINDOW STICKER & COPY OF 1ST TITLE, GAS MILEAGE TRENDS, & MAINTENANCE RECORDS. SPEAKING OF TITLES, THE TILE IS CLEAR & IN HAND, READY TO GO.  I CANNOT IMAGINE ANYONE BEING DISAPOINTED IN THIS TRUCK WHEN YOU SEE IT FOR THE 1ST TIME. I  WOULD SAY, THINK AS NICE AS YOU  WANT, & THEN BE PLEASANTLY SURPRISED WHEN YOU SEE IT. TOYOTA'S AS MOST PEOPLE KNOW, SEEM TO GO & GO, THIS ONE IS JUST GETTING STARTED!

Now for the business part, payment of $500 required within 48 hours of auction end, final payment to be made within 7 days. There will be no charge for PayPal on the deposit but would prefer the balance be paid in check, wire, or money order. As mentioned before the truck is located in Astatula Florida which is close to Mount Dora, Leesburg, or Clermont Florida. Very close off the Florida Turnpike about 30 minutes north of Orlando.

If you have any questions, please email thru Ebay or call 256-777-0844 & will be glad to help any way we can. I truly believe this is a rare opportunity to get a very good pickup, in great shape at a very reasonable price. Thanks so much for looking!