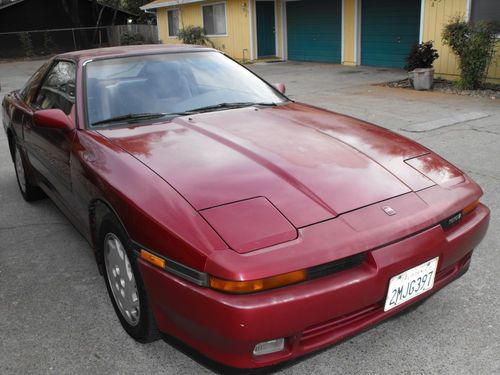 Up for sale is a 1989 Toyota Supra original California car rust free project. Removable one piece Targa roof that stores in the hatchback area very cool option! Has only 185,000 original miles. Equipped with an automatic transmission with overdrive. Car is still wearing the original paint job. Clear coat is peeling on hood and roof but otherwise still shinin. Only a few minor parking lot dings otherwise absolutely straight as a rail. Interior is in good overall condition no rips or tears anywhere could use a good detail job but would clean up nicely. Car runs and drives very solid for a 23 year old car. Needs new tires and a front windshield. Was just smogged a few days ago and passed with flying colors, clear title on current non-op no back fees. Car needs TLC but in amazing overall condition. This car was over $24,000 new in 1989! Call Dean at (530)953-6092 for more information.

The 2013 Toyota Camry is officially the car of the year in Korea. The country's motoring press graced the Japanese sedan with the honor for the first time, officially marking a shift in prevailing Korean attitudes toward Japan and its products. According to industry analysts, buyers in the country are no longer simply choosing their purchases based on whether or not they're made in South Korea, but rather based on quality and personal choice. That's a big jump from a few years ago, when buyers viewed their purchases through a patriotic lens.
The Camry managed to edge out a total of 44 other cars, including hardware from both Hyundai and Kia, to become the first foreign vehicle to take home the Korea Automobile Journalist Association's Car of the Year award. As The Detroit News points out, just 10 years ago, domestic manufacturers held some 99 percent of the Korean car market. But a change in trade regulations has opened up the country considerably, and buyers now have access to a wide range of products from around the globe. As a result, Hyundai and Kia have countered by cutting prices in an attempt to keep their grip on the market.