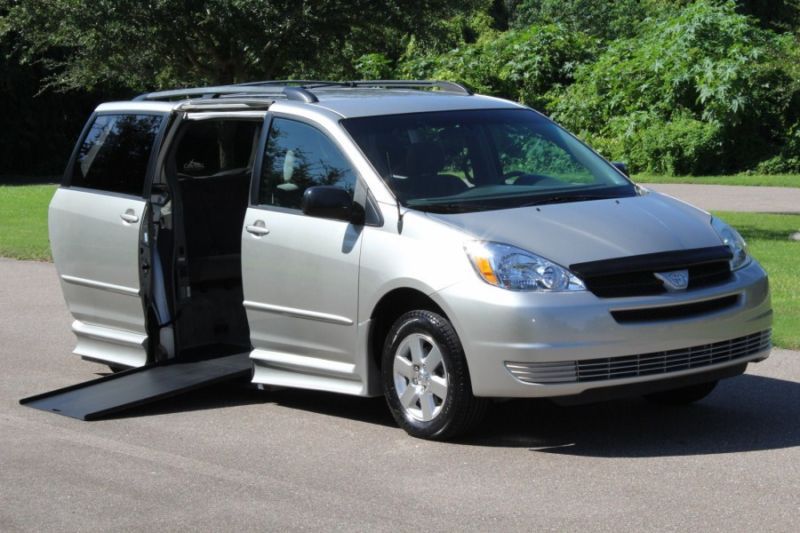 2004 Toyota Sienna LE 77k miles Rampvan Conversion Very Good Condition $16,500 FIRM
This Sienna has 77k miles and it is in very good condition everywhere you look. This vehicle's engine, transmission
and the handicap equipment are in 100% working condition. Please note I have provided detailed pictures for you to
get an adequate appearance of the condition of the vehicle.
Auto Door The OEM door operator reliably opens the sliding door at the touch of a button. This feature can be
activated with the standard keychain remote, or with one of the five interior control switches.
Auto Kneel To make entering and exiting the vehicle even easier, the Braun Rampvan features an integrated
"kneeling" system. An electric actuator lowers the rear suspension while the door opens, which reduces the slope of
the automatic ramp.
Auto Ramp The lightweight aluminum ramp extends to allow easy access to the interior for wheelchairs and scooters.
In the event of power failure, both the door and ramp can easily be operated manually in the Rampvan.
Lowered Floor From the toe pan to the rear axle the Braun Rampvan's floor is up to 10" lower than conventional
minivans. With a choice of seating positions, wheelchair users can choose to ride in their chair and enjoy the
view.
Removable Seating For those who want to ride up front or even drive from their wheelchair, the Rampvan makes it
easy: simply unlock the seat bases and roll the entire seat out of the vehicle. The seats can be reinstalled just
as easily when needed.
DIMENSIONS & SPECIFICATIONS
*Removable Passenger Seat
*Removable Driver Seat
*Automatic Sliding Doors
*Automatic In-floor Ramp
*Automatic Kneeling System
*EZ-Lock Passenger Side
*Custom Ground Effects
*Lowered Floor 10"
*Multiple Tie-Downs
*Door Opening Width 31-1/4"
*Door Opening Height 54-1/4"
*Interior Height at Center of Van 59-1/4"
*Interior Height at Driver & Passenger Position 57-1/4"
*Ramp Length 52"
*Ramp Width 29-1/4"
*Interior Floor Length (Behind Front Seats) 50"
*Overall Floor Length (Flat Area) 83-1/2"
*Interior width at B Pillars 62-1/4"