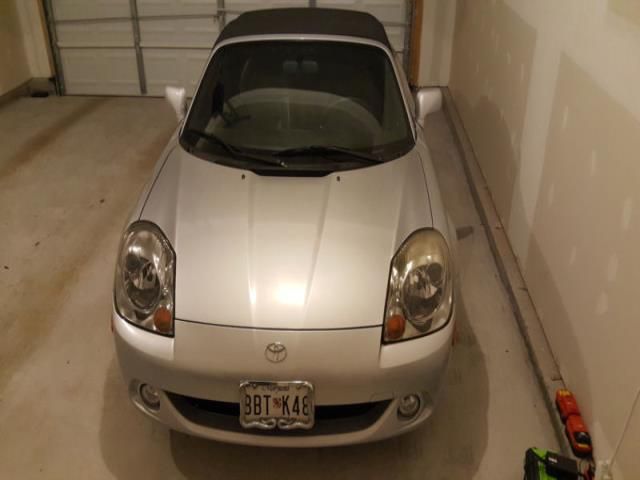 For more details eMail me : dec07barnardbertram@mail.com

I am selling my fully loaded 2003 Toyota MR2 Spyder. I really dont want to sell my fantastic car, but I have recently been diagnosed with Crohns Disease and Lupus which makes it difficult for me to get in and out of the car. Since being diagnosed, the car has been very much loved and appreciated, but unfortunately I cannot drive it like I used to. I need to find a new drive who can drive, love, and appreciate this car in the way that it deserves and I no longer can. Here are some features of the car: 6 Speed Sequential Shifting AEM Cold Air Intake (purchased at Toyota Parts Store and installed by a Toyota Dealer in MD) Tires (3-5k miles on them) Pioneer DVD/CD/MP3/NAV and 4 new speakers Power Windows Power Locks Power Lumbar Control Power Mirrors storage compartments behind the seats Air Condition and Heater work very well Full Size Spare Leather Seats Carbon Fiber Dash Fog Lights Factory Air Intake (available in a box after cold air intake installed) Carpet and Floor Mats in good shape This car has been recently service (cleared the sales floor at the dealership of people who wanted to see it) and cleaned and ready for a healthy owner who is ready to go on some fun drives. It is a head turner. I have a good chunk of the service records if interested. Please message me to see or test drive the car and Good Luck. :) Fine Print: Odometer could be higher than listed depending on number of test drives. This vehicle is also due for another state emissions inspection as of todays mail delivery, so there may be a few more miles due to that as well. Thanks.