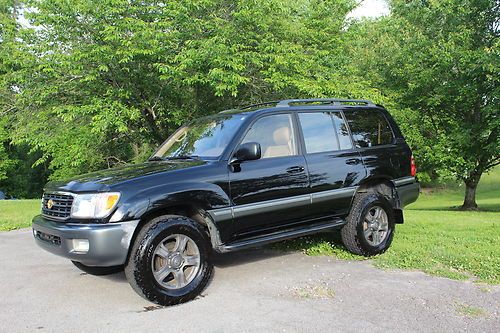 Condition: UsedA vehicle is considered used if it has been registered and issued a title. Used vehicles have had at least one previous owner. The condition of the exterior, interior and engine can vary depending on the vehicle's history. See the seller's listing for full details and description of any imperfections.Seller Notes:"The bad:The passenger front fender & headlight were victim of a flying trash can. Replaced with Toyota parts.Gauge cluster was replaced and odometer shows 15,000 +/- less than the actual mileage. Windshield is cracked along the top, appox. 3" from top. It's not in the line of site during driving or leak. It's less than $200 to replace."

This Land Cruiser is in great condition and has not been off road, but is ready to go.

The bad:
The passenger front fender & headlight were victim of a flying trash can. Replaced with Toyota parts.
Gauge cluster was replaced and odometer shows 15,000 +/- less than the actual mileage.
Windshield is cracked along the top, appox. 3" from top. It's not in the line of site during driving or leak.  It's less than $200 to replace.