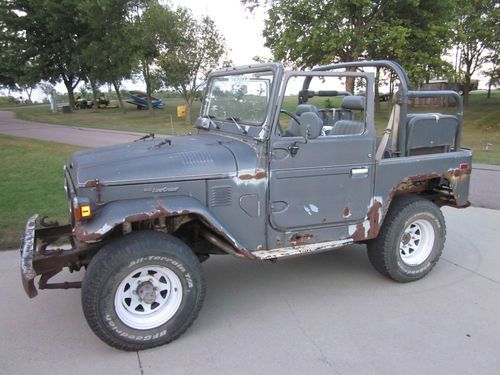 I purchased this land cruiser 2 years ago from a local private owner.  The land cruiser did not run at the time.  I had a mechanic work on the cruiser and it now runs very well.  The cruiser is in rough condition and appears will need a tub/cowl among other panels.  I have removed the hard top and have all panels.  I also purchased a new side panel and two other rear ambulance doors.  The items replaced are as follows: spark plug wire set, brake master cylinder, coolant flush, clutch slave cylinder, clutch master cylinder, tail lights, mirrors, new muffler, and intake manifold gasket.

My intentions were to replace the tub/cowl and restore the cruiser, but this just isn't going to happen. The 4 wheel drive works well.  The clutch does slip some in 3rd gear. There is also a small oil leak. Please take a look at the photos enclosed and email me with any questions.

Thank you for your interest.