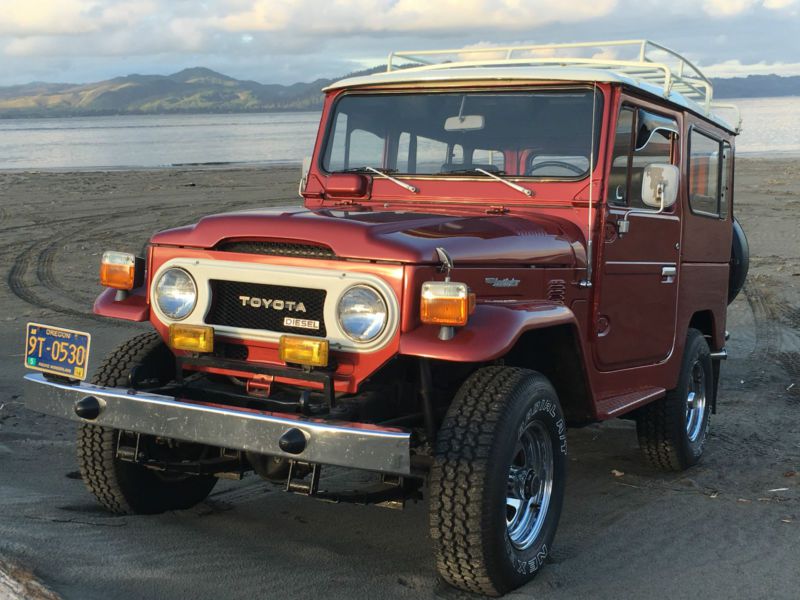 Please message me with questions at: mozellemmmenning@ukprint.com .

For sale is this rare 1979 Toyota Land Cruiser BJ40 Diesel. It was imported from the country of Costa Rica and has
a clean Oregon title where it is located. This BJ40 is a gem; it’s almost impossible to find Diesel cruisers in
this condition and so well preserved. This is an "original condition" vehicle, not a restoration or re-build, which
is even more rare. Original body, metal, motor, steering, brakes, head-liner etc. The paint and seat-door coverings
were new in 2009, but you can see in photos/video top quality.

It was purchased new in 1979 and kept in a garage, only taken out for pleasure cruising and trips around town.
Which such light use, it has 78,000 original kilometers (64,000 Miles). This BJ40 has absolutely no rust or other
signs of deterioration of the body, which is common in these vehicles in any climate. What you see in the photos
and video, is what you see in-person with this vehicle.

The B Diesel motor is known to be a workhorse and nearly indestructible, with fuel-economy of over 20 miles per
gallon. The BJ40 is a manual 4-speed with original steering. The vehicle shifts smoothly and travels straight with
great power. The 4-cylinder motor is made for low end torque climbing and cruising of 45-50 mph. A pioneer stereo
with CD player and new speakers were installed.

It was carefully maintained, up until the day of sale by the original owner. Our trusted mechanic, with years of
experience with these vehicles, did a complete inspection and found a few routine items common in a 37 year-old
vehicle. The following maintenance was done in 2016:
Cleaned motor and injection system and replaced injection heads
Reviewed and changed Glow Plugs
Changed oil and all filters
New belts
Revision and change of rubber seals
Changed primary pump on the clutch and adjusted
New radiator
Cleaning and adjustment of brakes, replaced brake fluid
New battery
Painted top, rack and ladder
Paint was re-done in 2009 in Carnival Red (T-335), inside and out. The paint is clean and professionally done. We
re-painted the vehicle top, rack and ladder in original white. This is a vehicle that doesn’t come along very
often. On June 18th, we entered into the Seaside, Oregon Car Show and won the "Founders Award". If you have been
waiting to find that near perfect Diesel Land Cruiser, then your wait is over!