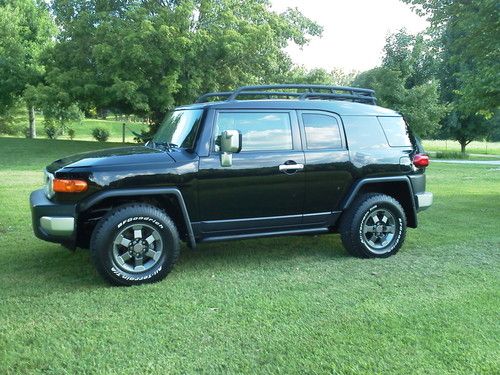 Condition: UsedA vehicle is considered used if it has been registered and issued a title. Used vehicles have had at least one previous owner. The condition of the exterior, interior and engine can vary depending on the vehicle's history. See the seller's listing for full details and description of any imperfections.Seller Notes:"This vehicle is in excellent shape inside and out, and drives great. Only very minor cosmetic flaws exist, consistent with a very well taken care of six year old vehicle."

I am the original owner of this vehicle. It was purchased from Beaman Automotive in Nashville, TN. It has never been offroading, or in the mud. It has never been smoked in. It has had Castrol 100% synthetic oil since the first oil change, and every 5000 miles, along with the Toyota filter. This vehicle is in excellent condition for its age and mileage. It is super clean, including the interior and engine. It drives great. It has the towing package, as well, and tows my 21' boat great. It has the other options that come with a 2007 TRD version including:  lockable rear differential, rock rails, customized TRD interior, custom TRD 16" wheels, solid black roof (only on TRD versions), and the TRD intake and exhaust that give it more power.
The miles were compiled mainly on the interstate during my 100 mile work commute from January 2007 to April 2012. It has a few small rock chips that are expected from a six year old vehicle. It has one small dent on the rear gate where it was opened and hit something. There are three small places on the trim above the trailer hitch where my boat trailer tongue hit it while hooking up. The four tires on the ground will need replacing soon. The spare is 85%. All are BFG  All Terrain T/A which have lasted 60K plus miles on the previous two sets.
I have recently replaced the shocks, brakes, and the catalytic converter. I have had absolutely no trouble with this vehicle.

I will not deliver this vehicle. Although, arrangements may be made to meet buyer with vehicle.
I reserve the right to end the auction at any time, as vehicle is for sale locally.
Nothing is owed on this vehicle, so if a dealer contacts me, I'm not selling for wholesale. I'm not in a hurry.

Please feel free to text or call me with any questions, excluding commercial interests such as those wanting to sell it for me, or wanting to sell me something.
931-242-0162